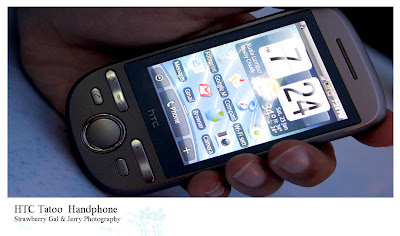 This is a gift from my beloved boyfriend since my phone had already KO. And it is a Android Platform phone

ABOUT
The HTC Tattoo (formerly known as the HTC Click) is a phone manufactured by the HTC Corporation for the Android platform. It is the second phone to feature the HTC Sense[4] interface. The phone was announced on 8 September 2009.
Unlike other Android handsets from HTC, the Tattoo has a resistive touchscreen instead of capacitive. The device's designer explained that it was tested with a capacitive display, but that multi-touch simply wasn't practical on such a small screen, while the company's Twitter feed states that a capacitive screen is insufficiently accurate at this size. The resistive screen may also reduce costs. It has been confirmed by HTC that all future Android handsets will use capacitive screens, making the Tattoo the last one to use resistive.
Gift