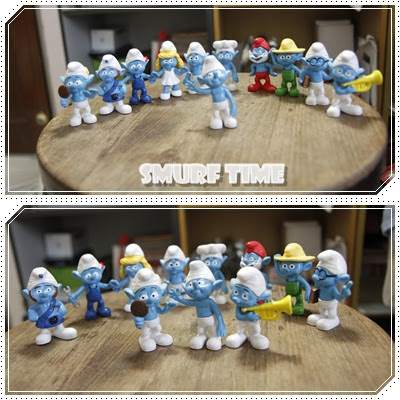 I found some SmuRFS.. and it is picture time for the day. I am in love with Smurf .. after Mcdonalds released them :).I had also googled and found some thing on SMuRFS

The Smurfs (French: Les Schtroumpfs, Dutch: De Smurfen) is a comic and television franchise centred on a group of small blue fictional creatures called Smurfs, created and first introduced as a series of comic strips by the Belgian cartoonist Peyo (pen name of Pierre Culliford) on October 23, 1958. The original term and the accompanying language came during a meal Peyo was having with his colleague and friend André Franquin at the Belgian Coast. Having momentarily forgotten the word "salt", Peyo asked him (in French) to pass the schtroumpf. Franquin jokingly replied: "Here's the Schtroumpf — when you are done schtroumpfing, schtroumpf it back..." and the two spent the rest of that weekend speaking in "schtroumpf language". The name was later translated into Dutch as Smurf, which was adopted in English. (from Wiki)
Toys