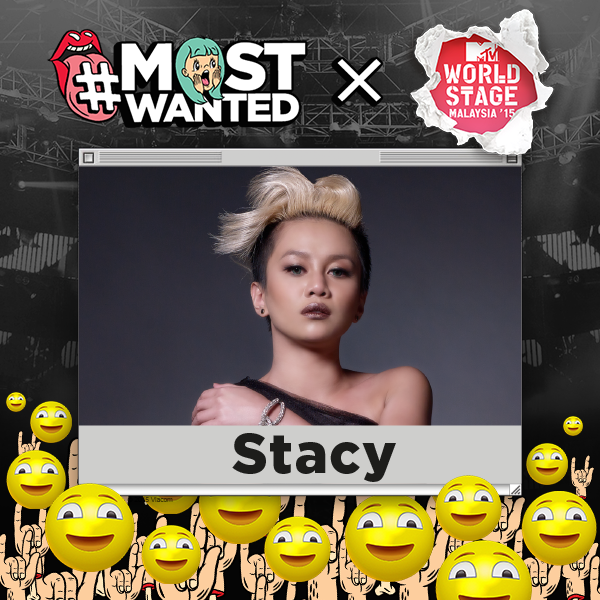 MTV has turned the spotlight on fans! After two weeks of fans’ voting, award-winning Malaysian singer, Stacy (aka Stracie Angie Anam) emerged from 28 local acts to be Malaysia’s #MostWanted Act to perform as the opening act at MTV World Stage Malaysia 2015 at Surf Beach, Sunway Lagoon on Saturday, 12 September 2015. Additionally, after poring through over 600 entries, MTV announced three candidates who scored their mentorship stints under MTV Breaks ignited by Xpax at MTV World Stage Malaysia 2015:

"I’m shaking with excitement with this huge opportunity on the MTV stage. Thank you MTV and to my fans who voted me as Malaysia’s #MostWanted Act. I’ll make you proud! So come celebrate with me at MTV World Stage Malaysia 2015!" – Stacy

Paras Sharma, Vice President, MTV & Digital Media, Viacom International Media Networks Asia commented: “Our focus was to turn the spotlight on fans and showcase talent in front of the camera and behind the scenes. The fans have spoken and chosen Stacy as their #MostWanted local act to open the show! And we are thrilled to be able to offer young creative talents a break to kick-start their aspiring careers.”

Award-winning Malaysian singer, Stacy (aka Stracie Angie Anam) had a humble beginning when she started out as a singer in local clubs to help support her family at the age of 16. Early on, Stacy participated in a few notable singing reality shows, but Stacy rose to fame after winning the sixth season of Akademi Fantasia in 2008, receiving 43 percent of over 3.8 million votes.

Her debut album, “Aku Stacy” was released in March 2009. Since then, the 25-year-old from Kota Kinabalu has been on a fast-track to stardom at home, having released two other albums, “Stay-C” and “Stacy #1” in 2011 and 2014 respectively with Warner Music Malaysia, where the latter album is also released in Singapore, Indonesia and Brunei. Proving her popularity over the last seven years, Stacy has bagged more than 12 awards locally, including two awards at Anugerah Bintang Popular Berita Harian and Album #1 at AIM Kulit Album Terbaik last year. Also known as the "Malaysia Dancing Queen", she has performed on a number of local shows and made numerous TV appearances.