on September 17, 2015
Malaysians are in for a treat on 22nd September, 9.00PM as Warner TV HD (HyppTV Channel 613) electrifies local airwaves with a back-to-back premiere of the highly acclaimed GOTHAM (Season 2) and brand new series Blindspot. First and exclusive on Warner TV HD, these same-day-as-the-U.S. telecasts will keep viewers guessing who is the ultimate hero and villain. 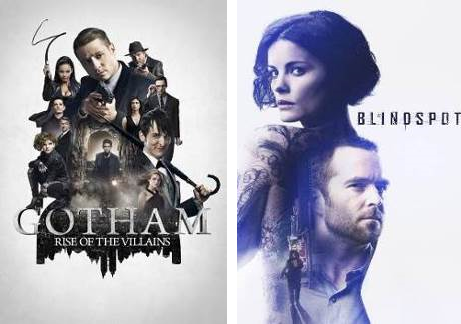 GOTHAM (Season 2), subtitled ‘Rise of the Villains’ promises to explore the origins of Gotham City’s corruption prior to the existence of Batman. The stakes are higher than ever, as ambitious and depraved supervillains are introduced whilst a realignment of alliances disrupts the fight for power in Gotham City. With Detective Jim Gordon (Ben McKenzie) and the ethically questionable veteran Detective Harvey Bullock (Donal Logue) at the forefront of the fight against crime in this corrupt city, Season 2 will see Gordon’s moral compass wavering, as he confronts Gotham’s most notorious criminals.

Building on the suspense is new series, Blindspot – airing at 9.50PM on the same evening. Set to take viewers on an intriguing ride, this series revolves around hardened FBI agent, Kurt Weller (Sullivan Stapleton, Strike Back/300: Rise of an Empire), who is drawn into a complex conspiracy when an unclothed, amnesiac Jane Doe (Jaimie Alexander, Thor) is found in Times Square covered in a series of cryptic tattoos, including his name on her back.
Don’t miss the series premiere as Weller and his FBI teammates begin to investigate and soon realize that each tattoo on her body is a crime to solve that will lead them closer to the truth about her identity and the ambiguities to be revealed.

With each passing day, Jane unveils a new skill or a hidden talent without understanding its origin, while Weller is drawn deeper into his troubled, complicated relationship with this mysterious woman. They both strive to make a connection, unaware of the dangerous blindspot that threatens them.

Tune-in on Tuesday, 22nd September for the back-to-back, same day as the U.S. premiere of GOTHAM (Season 2) at 9.00PM and Blindspot at 9.50PM, exclusively on
Warner TV HD (HyppTV Channel 613) and the HyppTV Everywhere mobile app.
drama Movie