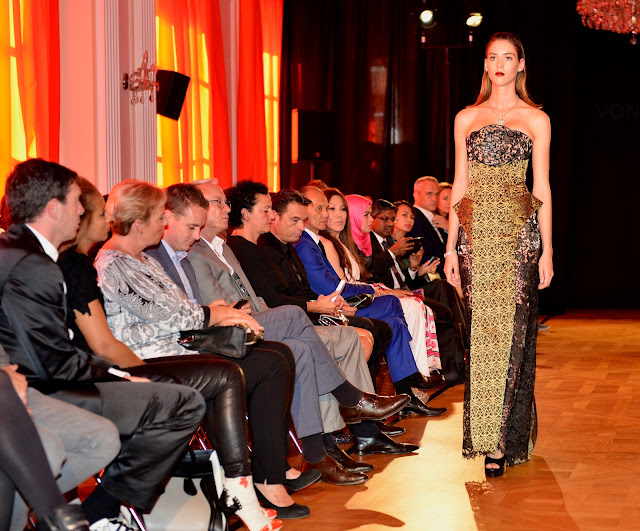 The Malaysia Fashion Week (MFW) 2015 got off to a grand start over the weekend at the annual international showcase of the Mercedes Benz STYLO Asia Fashion Week to a host of global guests, trade and media audiences at the Maison De L’Amerique Latine, Paris.

MFW 2015 happening on 4 to 7 November in Kuala Lumpur will feature the Spring/Summer 2016 collection of over 60 Malaysian designers at its Malaysia Fashion Showcase and over 30 international designers at its Mercedes-Benz STYLO Asia Fashion Week together with an exhibition of over 300 booths of Malaysian and International businesses of fashion apparels, accessories, cosmetics and personal care as well as textile.

The MFW 2015 Global Launch is an intimate initiation to the fashion event, which happens from 4 to 7 November, and Kuala Lumpur as an up and coming fashion destination. Eight designers brought runway style through collections that pulsed with sculptural and sharp-edged silhouettes, chic traditional wear and whimsical totes, generating immense interest amongst the invite-only guests, which included French media, fashion influencers and International buyers. Malaysia’s beloved shoe couturier extraordinaire Datuk Professor Jimmy Choo, who is Honorary Advisor to MFW, was the Guest of Honour. Also present were Mr Florian Muller, Director General of Mercedes-Benz Retail France and Mr Roland Folger, President and CEO of Mercedes Benz Malaysia.

Director General of Mercedes-Benz Retail France, Mr Florian Muller said at the Global Launch, “Mercedes-Benz is pleased to join hands with our Malaysian office in playing host to the global launch of Malaysia Fashion Week. Reinforcing our inexorable support of the fashion industry, we are pleased to bring together two fashion cities of the East and West through this fashion exchange.” As part of the launch initiative, an international exhibition took place 20 and 21 September 2015 at the Mercedes-Benz Gallery, situated at the famed Champs-Elysees, complete with an elaborate display of each designer’s brand and collection.

The MFW team brought in more than 60 top French buyers such as Galerie La Fayette and Printempts to personally meet and discover each one of the nine designers and brands, namely Bon Zainal, Fairuz Ramdan, Illiza Ho, Porosus, Blancheur, Royal Selangor Pewter, Von Jolly Couture together with Ali Charisma (Indonesia) and Avel Bacudio (Philippines) – a previous winner of Asia’s Most Influential Designer Award at the Mercedes Benz Stylo Asia Fashion Week 2013. The Global Launch is an ideal platform to promote some of Malaysia’s leading fashion talents, while creating boundless business opportunities for industry players.

Chairman of MATRADE, Datuk Noraini Ahmad, who was present at the Global Launch, quoted, “ As Malaysia’s national trade promotion agency, MATRADE is  pleased to introduce a talented list of designers to a wider, more international audience enticed by what Malaysia and Asia have to offer. We recognise the global launch as an integral segment towards promoting MFW 2015 and invite global trade buyers to Kuala Lumpur for the event.” President and CEO of Mercedes-Benz Malaysia, Mr Roland Folger echoed the Chairman’s remarks. “Paris - the epicentre of fashion is the perfect launch pad for young Asian designers to the rest of Europe.

Mercedes-Benz has long believed in fostering events that showcase creative excellence in fashion and design, innovation and inspiration.” he said. Participating designers were meticulously selected based on their international appeal and their finesse in capturing the Asian essence through their brand and collection. Co-Chairman of MFW 2015 & Chairman of Mercedes-Benz STYLO Asia Fashion Week Datuk Nancy Yeoh said, “While many designers are in London right now, we took the strategy to showcase in Paris instead ahead of its fashion week.

Otherwise it would be too easy to miss us by next week when the world descends on the global fashion capital of the world” She further added, “The ground-breaking nature of the fashion we will be showcasing at this year’s MFW will culminate in the prestigious Mercedes-Benz STYLO Asia Fashion Week, which is developing into one of the region’s most sought after event. The Mercedes-Benz Stylo Asia Fashion Week (MBStyloAFW) Awards is a chance of a lifetime for Asian designers to be recognised beyond their borders. It promises to be more iconic and revolutionary than ever at the closing of MFW 2015.”

Bon Zainal – With over 20 years in the fashion industry, Zainal has stamped his mark as one of the country’s leading designers, renowned for his exquisite menswear.  Zainal was awarded the coveted ‘Designer of the Year Award’ at the Mercedes-Benz Stylo Fashion Grand Prix 2014, which is a fashion event that coincides with the annual Formula One Petronas Malaysian Grand Prix.

Fairuz Ramdan – A strong advocate for fashion, Ramdan is a natural designer; Fairuz Ramdan Bespoke was his debut collection that has since expanded to include others such as ready-to-wear and resort-inspired lines. Ramdan, highly acclaimed for his quirky and cutting edge designs, is this year’s (2015) recipient of the ‘Designer of the Year Award’ from the Fashion Grand Prix event.

Illiza Ho – A protégé of Datuk Professor Jimmy Choo, Ho lends a playful twist to her range of accessories.

Royal Selangor Pewter – a global pewter brand that’s recognised for pushing the envelope in design yet remaining true to its heritage of fine craftsmanship. A truly iconic Malaysian brand that’s been captivating the world since 1885 with its precious collection.

Von Jolly Couture – a brand that’s synonymous with the exotic beauty of East Malaysia; its elegant evening range of gowns and dresses is inspired by traditional batik and Borneo prints. The designers behind Von Jolly are from Sarawak, a Malaysian state in East Malaysia famous for its colourful and vibrant indigenous cultures.

Avel Bacudio – a leading designer from the Philippines who dresses celebrities and personalities with his flair and panache in structured, almost architectural designs. His story is one of passion, determination and sheer hard work that’s won him numerous awards.

Malaysia Fashion Showcase (MFS) Highlighting the very top tier of leading and emerging Malaysian designers and their collections such as Joe Chia, Bon Zainal, Fairuz Ramdan, and many more; as well as creative talents from accessories, hair and make-up industries.

MFW 2015 sees the injection of luxury automaker, Mercedes-Benz, presenting the Asian segment called “Mercedes-Benz STYLO Asia Fashion Week (MBSAFW)” further boosting the trade fashion event. MBSAFW presents a list of the best designers from various Asian countries with China being its biggest - showcasing their designs using the MFW as its Asian platform.
Ranked as the 30th fashion week in the world, this “Asia for Asia” fashion week will feature international designers from over 15 countries from the ASEAN and Asian region. The closing will see the prestigious Mercedes-Benz Stylo Asia Fashion Week (MBStyloAFW) Awards recognising the talents of the region’s established designers.
A Snapshot of MFW 2015:

In line with MFW 2015’s YOUTH ENGAGEMENT direction, another sought after award will be introduced - the Datuk Professor Jimmy Choo Education Program Awards, where young, emerging designers will be recognised and stand a chance to win a coveted fashion mentorship with the famous personality in London. This year, MFW will be a 4-day event from 4 to 7 November in Kuala Lumpur.

For more information, browse over to malaysiafashionweek.my or follow the social media pages by searching for Malaysia Fashion Week on Facebook/Instagram and stand a chance to win exclusive opening/closing gala & fashion show tickets by ‘Liking’ our Facebook page and hashtag your photos/videos with #myfw2015.