on October 05, 2015
Renowned Australian soft rock band, Air Supply, returns to Malaysia for the band’s 40th Anniversary World Tour Final Leg. Organised by E-Plus Entertainment Productions (M) Sdn Bhd, fans can listen and sing along as the legendary duo belt out all their popular hits as well as their latest single in five (05) years, ‘I Adore You’. 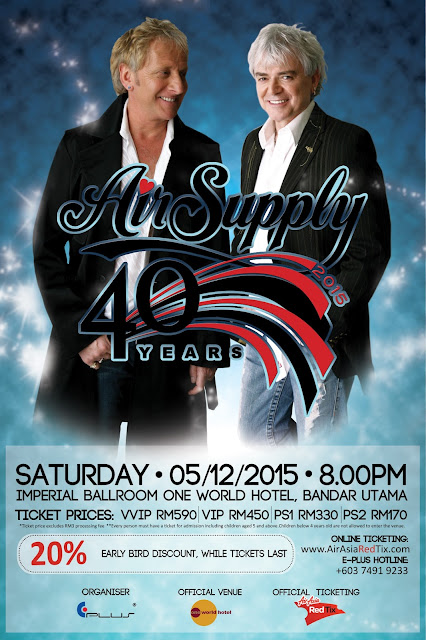 The concert will be held at The Official Venue, One World Hotel Bandar Utama on Saturday, 5 December 2015 at 8.00 pm.

British-born singer-songwriter and guitarist Graham Russell and lead vocalist Russell Hitchcock, conquered the world with eight Top Ten hit songs in the United States during the early 1980s including Lost in Love, All Out of Love, and The One That You Love. In 2013, the band was inducted into Hall of Fame of the Australian Recording Industry Association (ARIA) for their music and contribution to the industry.


“Air Supply is a household name that has painted joyous and unforgettable memories over generations of listeners. Their inspiration to the growth and development of the music industry is undeniable, making the legendary duo one of the most respected bands in the world. E-Plus and fans alike are extremely excited that they have decided to perform the final leg of this World Tour in Malaysia,” said Andrew Ching, founder of E-Plus.