‘She Was Pretty’ Premieres on Oh!K this January 2016

on January 05, 2016
Start the New Year off with a journey of love and a twist of fate in Korea’s latest romantic comedy – ‘She Was Pretty’! The series, which recently won 11 awards at the prestigious 2015 MBC Drama Awards stars Korean sensations, Hwang Jung-Eum, Park Seo-Joon, Super Junior’s Choi-Siwon and Ko Jun-Hee. ‘She Was Pretty’ premieres exclusively on Oh!K (Astro Channel 394) on Monday, 4 January 2016 at 8.55pm. 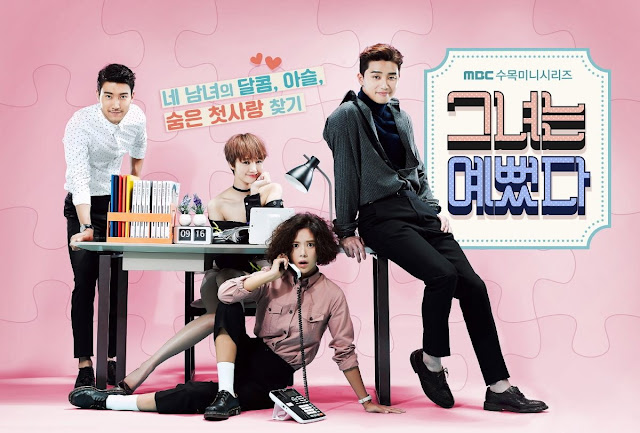 Follow the story of Hye-Jin (Hwang Jung-Eum), a young and beautiful girl whose blessed life took a turn for the worse when she became a teenager. Losing her family fortune and beautiful looks, she now lives rent-free with her best friend Min Ha-Ri (Ko Jun-Hee) and works part-time as a clerk in a convenience store.

As fate would have it, her childhood love, Sung-Joon (Park Seo-Joon) a previously awkward and unattractive boy, grew up and became a handsome and eligible bachelor. When Sung-Joon moved back to Korea, he reached out to Hye-Jin, but ashamed of her looks and poor social standing, she hatched a plan to have her friend, Min Ha-Ri meet him instead in her place.


The plan seemed to have worked until Hye-Jin landed a full-time job at a big publishing company where coincidentally Sung-Joon is the boss! He’s seen to be kind and caring to Ha-ri, whom he believes to be Hye-jin, while he treats the real Hye-jin with hostility. One question remains throughout the series – can their past love transcend the vanity they both associated each other with?