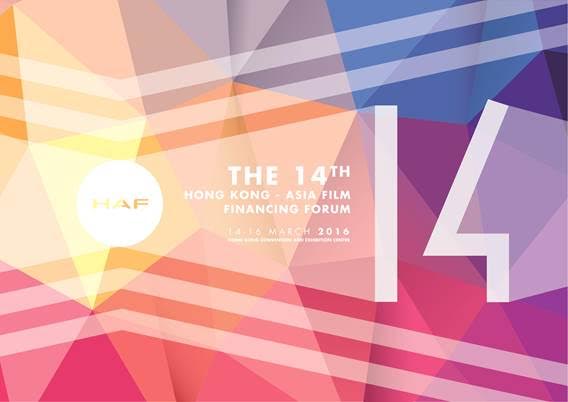 The 14th Hong Kong - Asia Film Financing Forum (HAF), which will be held from 14 to 16 March, today unveiled 31 outstanding film projects, including three projects in the HAF/Fox Chinese Film Development Award, originating from 15 countries and regions. This year, HAF received a record-breaking number of submissions; more than 350 projects in total. This year’s projects cover a wide range of topics and feature a mix of renowned filmmakers as well as new and young talents. Two new additional awards are also announced, namely the Artention Films Award and Wutianming Post Production Award.

The shortlisted projects include five Hong Kong feature films. The award-winning director Adam WONG, after the success of She Remembers, He Forgets (HAF 2011), returns to HAF with his new project Trains In The Night. Amos WHY, who made his directorial debut Dot 2 Dot, joins this year’s HAF with the adaptation of an award-winning novel into the suspense feature Napping Kid. Local talents Kenneth LAI and Paul SZE will work with renowned actor and producer TIN Kai-man for a thriller Hypnotize the Jury. Scriptwriter Anthony YAN Pak Wing is joining forces with Hang CHIU, lead singer of  local band ToNick, to tell a story of faithfulness and relationships in their comedy Vampire Diary, which will be produced by acclaimed actor HA Yu. Best New Director of the 31st Hong Kong Film Award 2012, Jessey TSANG Tsui Shan, follows the success of her latest documentary Flowing Stories (HAF 2012), with the erotic feature The Lady Improper.

The 14th HAF will also feature established industry figures from across the region. This includes famous Taiwan singer, songwriter, actress and writer René LIU, who is making her directorial debut with Lieutenant Yi, to be produced by celebrated actress and director Sylvia CHANG. Liu’s story is about a well-known late 80s singer in Taiwan, who desires to transform herself with the approach of the new millennium, encounters unexpected outcomes. Also from Taiwan, experienced actor-director Doze NIU will come on board as the producer of From Black and White to Shades of Grey, which will be the first directorial feature of young talent HUANG Zi.


NING Hao, nicknamed "China's Guy Ritchie" for his black comedies such as Crazy Stone and Crazy Racer, will produce the first film of new director Muye WEN. Inspired by a true story, his project Dying to Survive explores the dignity of life and how to attain it.


HAF also welcomes back Vietnamese director PHAN Dang Di, whose latest feature Big Father, Small Father and Other Stories (HAF 2011) was nominated for the Golden Bear award at the 65th Berlin International Film Festival. This year he returns with his fourth film All My Daughters, a feature about a lonely retired American woman who goes to Vietnam to look for her granddaughter who was sold during the Vietnam War. Tibetan director Pema Tseden, winner of the Best Adapted Screenplay at the 2015 Golden Horse Awards in Taiwan, also returns to HAF since 2012, to present An Everlasting Day, a story which reflects the spiritual history of the Tibet nation.

A number of veteran filmmakers’ projects have been selected for this year’s HAF. Experienced commercial film producer from Singapore CHAN Pui Yin, who produced the box office hits I Not Stupid and I Not Stupid Too, will produce Warrior of Love with Boris BOO and CHAN Yan-yan, directed by Derrick LUI. XU Wen, who participated in high-profile productions such as Kill Bill and 2046, will make her directorial debut with Golden Whale. SONG Fang, winner of the Best First Feature prize of the 65th Locarno International Film Festival, will present The Autumn Morning. Following his most recent film A Lullaby for the Sorrowful Mystery, which has been selected in the Official Competition at Berlin International Film Festival 2016, Filipino filmmaker Lav DIAZ will bring his new work When The Waves Are Gone, to HAF.

HAF has included documentary projects since 2012. Five projects have been selected this year from China, Georgia, Japan, Kazakhstan and Korea. The topics range from individual achievement to social and political issues. Abastumani, a project that explores the questions of life and death and co-directed by Nik VOIGT and Mariam CHACHIA, is the first project from Georgia selected for HAF. Anna VILGELMI, producer of Emir Baigazin’s new project The Wounded Angel, will produce About Life of Planets that follows a group of dreamers who raise their eyes to the stars. WANG Bing, one of the most important contemporary documentary filmmakers, examines the marriage of Laotian women in his new project Border Bride, which will be produced by Isabelle GLACHANT.

The HAF’s regular partnership with CPH:LAB this year brings the feature-length documentary Letters. The project records the lives of two ordinary people living on opposite sides of the world. This coproduction will be directed by South Korean director Jero YUN and Norwegian director Marte VOLD.

Speaking on behalf of HAF, Jacob Wong, Curator of the Hong Kong International Film Festival Society and Director of the HAF, commented, “We are thrilled to receive a record-breaking number of submissions for the 14th HAF. The panel went through an exciting yet arduous selecting process. The projects are diverse in topic and style but there is one bond that tied them all together and that is their quality.”

The HAF/Fox Chinese Film Development Award was established in 2012 and is a collaboration between Fox International Productions (Greater China) and the Hong Kong - Asia Film Financing Forum. The Award aims to nurture promising Chinese projects that shows regional appeal. The Award celebrates its fifth edition this year with three exciting finalists.

The three finalists are: Jong YU’s drama film Brothers, Hong Kong film Coarse Tea, Plain Rice by CHEUNG Suk-yee, and Man-Made Citizen directed by LI Yang. The winner of the Award will receive a cash prize of HK$100,000 and a Development Contract with Fox. Other finalists may also be offered a first look agreement.

The 14th HAF will present a total of 13 awards, amounting to approximately HK$1,378,500 in cash and value in-kind. HAF is pleased to welcome back Star Chinese Movies and iQIYI as sponsors of the HAF Script Development Fund and iQIYI’s Special Award, respectively, both supporting the Chinese cinema.

In addition, HAF is proud to announce two new partners: Artention Films Co. Ltd. will present the Artention Films Award comprising a cash award of HK$50,000 and an offer of priority entry to the Artention Film Incubator in Shenzhen, China. The China Film Foundation – Wutianming Fund For Young Talents will sponsor the Wutianming Post Production Award, an in-kind award of post-production services worth RMB300,000 in value.

Film financiers, investors and participants can register and schedule appointments with all the film projects at http://www.haf.org.hk/guest.php before 4 March. A complete list of the selected projects for the 14th HAF can be found in Appendix 1. Finalists for the 2016 HAF/Fox Chinese Film Development Award are listed in Appendix 2. For more information about HAF, please visit the official website at http://www.haf.org.hk/.
entertainment