THE POWERPUFF GIRLS RETURN TO SAVE THE WORLD 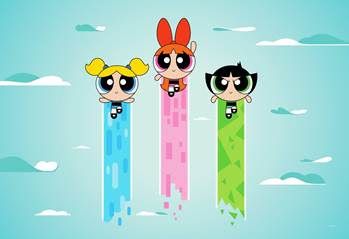 Powerpuff Girls will return to Cartoon Network (Astro 616) in Malaysia and across the Asia Pacific in an all-new, reimagined series! Ready for action, everyone’s favourite crime fighting trio will burst onto screens in a special cross-channel premiere event on Saturday, April 9.

From 10am, viewers in Malaysia will be able to catch six brand-new episodes of The Powerpuff Girls on Cartoon Network alongside new episodes of popular Cartoon Network originals: Adventure Time, We Bare Bears and Clarence. The premiere episodes will be available on sister-channel Boomerang (HyppTV 555), Warner TV HD (HyppTV 613) and Oh!K (Astro 394).


Malaysia’s leading integrated media group, Astro, will also be joining in on the fun, airing two episodes on Astro Ceria (Astro Channel 611) in Bahasa Malaysia on the same day.

Mark Eyers, Content Head for Cartoon Network in Asia Pacific, said: “The Powerpuff Girls will be simply everywhere! Whatever channel you turn to on April 9, and whatever screen you’re using, there will be Blossom, Buttercup and Bubbles saving the day before bedtime! We’ve waited a long time to see these super-cute and super-fierce girls return to action, and the all-new series marks the homecoming for one of Cartoon Network’s best loved franchises.”

The Powerpuff Girls stars sisters Blossom, Bubbles and Buttercup. Together, they protect the beautiful, bustling metropolis from sinister evildoers, intent on taking over. Armed with supercool superpowers and topnotch teamwork, The Powerpuff Girls, with some help from Professor Utonium and the Mayor of Townsville, continue to prove that it is possible to save the world before bedtime.

Created by Craig McCracken in 1998, The Powerpuff Girls has become one of Cartoon Network’s most enduring original series, earning two Emmy® Awards, five nominations and countless animation honors throughout its 78-episode run.

Don’t miss the special premiere event on Cartoon Network (Astro Channel 616) featuring the super cute and super fierce Powerpuff Girls, April 9 from 10am onwards, and look forward to the full series premiere on May 2.
entertainment Movie