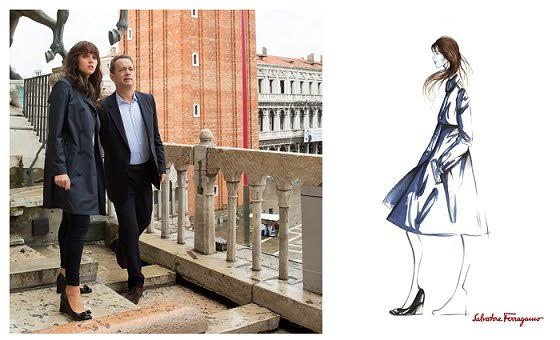 More than a year after the first take amongst the streets and monuments of its historic centre, on October 8, Florence will host the world premiere of Inferno, the much anticipated new fi lm directed by Oscar® winning Ron Howard (scheduled for worldwide release on October 13).

In the last chapter of the director's trilogy, adapted from Dan Brown's bestselling novels, Tom Hanks, once again, is Robert Langdon, the teacher of sacred iconology at Harvard University as in the two previous blockbuster movies The Da Vinci Code and Angels And Demons.

A further link with Ferragamo lies with the location, as almost the entire fi lm is shot in Florence, the elective city of Salvatore Ferragamo. Here, the protagonists will move through the famous squares and monuments, creating an image as elegant as discreet, and understated. The composed look of the chosen garments is indeed in open contrast with the fi lm's fast pace and opulently rich locations. Florence's great beauty will be the protagonist, recognisable from the squares, streets and buildings of one of the most memorable Italian cities.

It is almost an homage to Florence that is created by the eclectic actor and director with the support of the powerful Hollywood fi lm industry, which increasingly favours the unique Italian landscapes and architecture, making up the defi ning atmosphere that generated the expression “Italian style”: an elegant and delicate blend of quality and refi nement that made Italy famous across the world.

Back to the film's costumes, Salvatore Ferragamo is certainly not new to such extraordinary endorsements. The brand was the fi rst to break Hollywood, where its founder became famous as the “shoemaker of stars”, and where, at the end of last year it returned for the celebration of its 100 years as a leading player of worldwide fashion, taking place at the foot of the Hollywood sign.

The garments created for the fi lm
While the twinning between international cinema and Salvatore Ferragamo's fashion and accessories has gone on uninterrupted for over two generations, the partnership between Ferragamo and Ron Howarddates back to 2012, when the house was asked to design the costumes for the characters of Niki Lauda and his wife in the biographical sport drama Rush, played by a dry Daniel Bruhl with Alexandra Maria Lara, steeped in the world of the 70's style.

In this latest set of creations realised for Inferno, Ferragamo's contribution is expressed through contemporary garments, decidedly urban, elegant and discreet. Those created for Tom Hanks a simple charcoal grey suit and a sky-blue shirt. A pair of Tramezza lace-ups, the American’s epitome of Italian shoes, completes the outfi t that could almost be called anonymous, if it wasn't for the accurate cut and attention to detail. The wardrobe designed and created for Felicity Jones is made of an equally simple, soft-cut silk blouse in a feminine nude colour, worn over grey cigarette-leg pants. A pair of iconic Vara pumps with platform heels and an indigo trench complete her understated, elegant look.

The Florence locations
For the third time, Hollywood Oscar® winners Ron Howard and his protagonist, Tom Hanks, are called upon to solve a mysterious thriller – this time in numerous locations. Among them is Florence (before going on to Venice and Istanbul), starting from the bell tower of the Badia Fiorentina, where the first scene is set. The action moves then across the whole historical centre, from the Uffi zi Gallery to the Boboli gardens, to Porta Romana, Palazzo Vecchio and the Salone dei Cinquecento. Florence will appear once again on the silver screen in all its beauty. Inferno is only the latest fi lm of the many set in the city of the Ponte Vecchio; just like Tom Hanks is only the most recent of the many stars called upon to star in scenes in one of the cities most beloved by tourists from all over the world. Florence, the birthplace of Ferragamo, is partnered with Hollywood thanks to a special link lasting over 100 years; when its founder Salvatore arrived there with the secret dream to put his creations on the feet of the stars
Fashion