on November 23, 2016
Sony Pictures Television Networks’ powerhouse channels ONE HD and AXN packed a punch in Singapore and Malaysia last Thursday, with the highly anticipated Korean drama Legend of the Blue Sea premiere winning the timeslot across all pay-TV channels, and The Amazing Race Asia topping the international English channels. 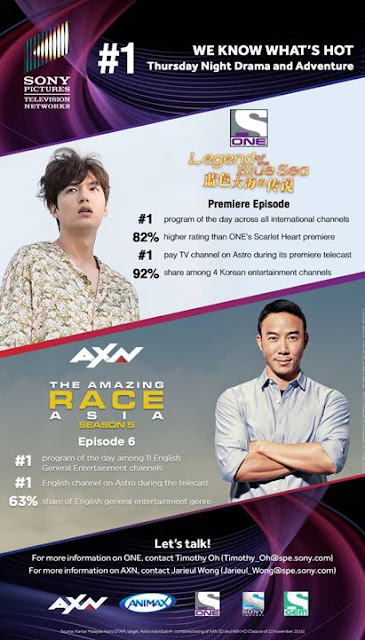 In Singapore, ONE HD’s Legend of the Blue Sea, starring reigning king and queen of Korea, Lee Min Ho and Jun Ji Hyun, made its premiere splash on November 17 at 8:10PM, and achieved a 52 per cent higher rating than the premiere of ONE HD’s blockbuster, top rated drama series Scarlet Heart. During its telecast, ONE HD was the top rated pay-TV channel with a 47 per cent higher rating than the next channel and scooping an 81 percent share amongst the four Korean general entertainment channels.

Legend of the Blue Sea also outperformed all other channels in Malaysia, achieving a whopping 92 per cent share amongst the four competing Korean channels. The series is ONE HD’s highest rating premiere episode in 2016, 84 per cent higher than the premiere of Scarlet Heart.

Switching genres to AXN, the adrenaline-fueled antics of the remaining six teams captivated audiences in both markets, making The Amazing Race Asia Season 5 the top rated program of the day amongst the English general entertainment channels. In Singapore, the episode achieved a 38 per cent share in its genre, which was two and half times higher than AXN’s closest competitor.

The Amazing Race Asia Season 5 continued its winning streak in Malaysia helping AXN dominate the Thursday night 9:00PM timeslot as the top rated English channel on Astro, garnering a 63 per cent share of viewing in its genre.

“Sony Pictures Television Networks’ channels offer viewers the very best in premium Asian and English content. Legend of the Blue Sea and The Amazing Race Asia Season 5 are vastly different viewing experiences so we are thrilled to cater to the diverse preferences of our audiences in Singapore and Malaysia. We remain plugged into the demands of the market and will keep delivering drama, variety and reality series that viewers live, breathe and crave,” said Virginia Lim, Senior Vice President and Head of Content, Production and Marketing, Sony Pictures Television Networks Asia.

Legend of the Blue Sea airs every Thursday and Friday at 8.10PM, within 24 hours of its Korean telecast. It is available first and exclusively on ONE HD (Astro Ch393). For more information on the series, visit www.onetvasia.com/Legend; and join in the conversation on social media with the official hashtag #TheLegendIsReal.

The Amazing Race Asia season 5 airs every Thursday on AXN at 9:00PM first and exclusively on AXN (Astro Ch701) and AXN HD (Astro Ch721). For special behind-the-scenes scenes clips and extra footage of the Race, visit www.AXN-Asia.com/TARA or join the conversation on Facebook @TheAmazingRaceAsia / #AXNTARA.
entertainment