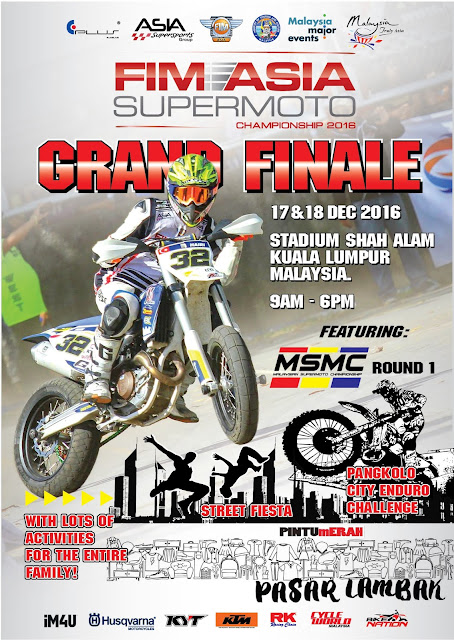 Gates will drop for the FIM Asia Supermoto Championship 2016 series at the world-renowned Shah Alam Stadium on 17 and 18 December 2016 from 9AM – 6PM (+8:00GMT), with over 20 international riders from 14 countries contending for the last time for overall standing and championship title.

Home to Selangor FA and host to countless global concert tours and football competition including the Chelsea FA and Arsenal FA’s friendly match against Malaysia’s national team, the stadium has the capability to hold a capacity of 80,372 audiences. This remarkable moment for the FIM Asia Supermoto Championship will transform its vicinity into a show stunning track to crown the overall champion of the 2016 series.

Satheswaran Mayachandran, CEO of Asia Supersports Group, said that the stadium has its charm and is the perfect venue to host the finale. “Shah Alam Stadium has a strong history and reputation in hosting various international sports and activities. Crowning the championship’s overall champion will be historical for the race.”

The showdown between Malaysia’s Muhd Habibullah (Gabit) and Australia’s Andy McLiesh will be the highlight for the Open International Class. With total points of 121 and 107 respectively, any minor mistakes on track could cost either rider their championship title. Gabit’s kin, Mohd. Al-Amirul Ashshahid (Gaban), might take the third spot, but luck could be with the Malaysian rider after his outstanding performance in Malang last October.


On the Asian Class chart, it will be the fight between brothers – Gabit and Gaban – for the championship title, with a slight chance for Khairi to top the podium. While we already knew that one of the Malaysian trios will take the top spot, Japan’s Takashi Sasaki will not forego the chance to secure a top 3 for himself.

FIM Asia Supermoto Championship 2016’s finale will be a race not to be missed, especially when the 2016’s standings are at stake for every rider. Top notch condition and full concentration witnessed by a crowd of supermoto enthusiasts will be the supreme curtain closure for Malaysia’s 2016 motorsport scene.

For more information and announcements, follow us on our Facebook at FIM Asia Supermoto Championship. Enquiries can be emailed to enquiry@eplusglobal.com.
Events