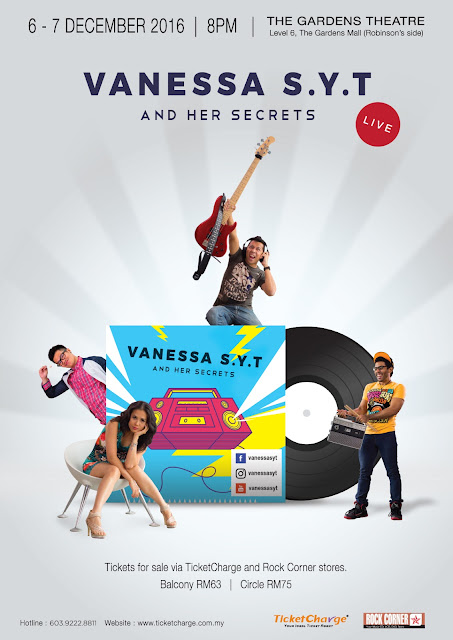 Vanessa s.y.t + Her Secrets is a group consisting of vocalist Vanessa s.y.t and musicians AJ (bass), Dennis Law (keys) and Omar (drums). All coming from different musical backgrounds of jazz, R&B, rock, hip hop, Chinese canto-pop, house and more, they will now collectively bring different sounds to their debut concert – with all songs fully written and produced by the group.

The leading lady in the band, vocalist Vanessa s.y.t. has conquered small and large stages in Europe, Asia and Malaysia in high profile private events for more than 10 years. While she chooses to remain obscure to many, her guests or audience are mainly of the well-heeled community including royalties, ministers, and celebrities such as Mel Gibson, Tony Blair, and more. Her vocal prowess and versatility allows her to seamlessly sway from jazz, R&B to dance in a heartbeat – the general public will now have the chance to witness her performance with the group’s original numbers. 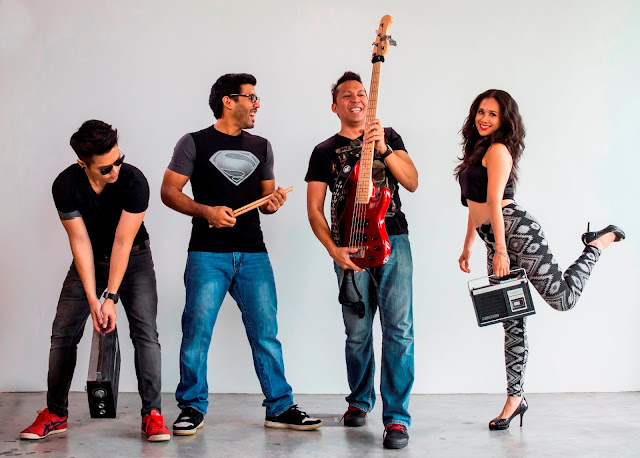 Leading the band and actively directing the sound of the group is Dennis Law on keys. A classically trained pianist from the age of 12, Dennis has gone on to be musical director for numerous concerts that included Z-Chen, Taiwan based Malaysian singer, as well as having performed for known Taiwanese and Hong Kong artistes such as Michelle Pan and Choo Mi Mi. He is also no stranger in the local musical scene performing for Cabaret, Secret Life of Nora and more.


Bringing the funk to the group on the other hand is AJ who plays bass. Having rocked the music scene for a while now with rap rock outfit PopShuvIt that have won numerous music awards, he now lends his producing and arranging experiences to the group to bring forth new sounds and styles. His string of collaborations with various artistes in various genres throughout the years also grants him the ability to perform in varying music genres such as Hip Hop, R&B, Jazz, and more.

Setting the group on the right beat is Omar. His tone and groove is no child’s play resulting from an extensive range of collaboration and experience he has garnered in the last 10 years, from playing for British singer and songwriter Leona Lewis to performing at many international music events such as South by Southwest Festival 2016, Austin Texas as well as opening act for international artiste like Michael Buble’s Crazy Love Tour. Omar brings to the group strong R&B and Hip Hop foundation with the twist of other genres in the mix.

In 2014, AJ introduced Omar to the rest. With little or no rehearsals at all, the quartet had a chemistry that was indescribable resulting in performances that were seamless and high octane which eventually led to the forming of Vanessa s.y.t + Her Secrets.

Vanessa s.y.t x Her Secrets LIVE concert will feature more than 12 original songs including some year-end festive numbers. The group leans heavily on R&B but not without the diversity of dance-pop, ballad, EDM, rock and hip hop elements – a move to cater to the mainstream for all ages.
According to Vanessa s.y.t, the group hopes to introduce the idea of versatility, all the while maintaining a positive mind-set with a splash of fun and mature sound. She intends to showcase how the band can slide between pop ballads to dance numbers seamlessly with their very own attitude – some twist and off-ness are in the pile too...not wanting to be another cliché group.

Vanessa s.y.t + Her Secrets LIVE will take place at The Gardens Theatre, Mid Valley City on 6 and 7 December 2016 at 8:00pm. Tickets are available via TicketCharge online as well as Rock Corner stores - priced at RM 63 (Balcony) and RM 75 (Circle).