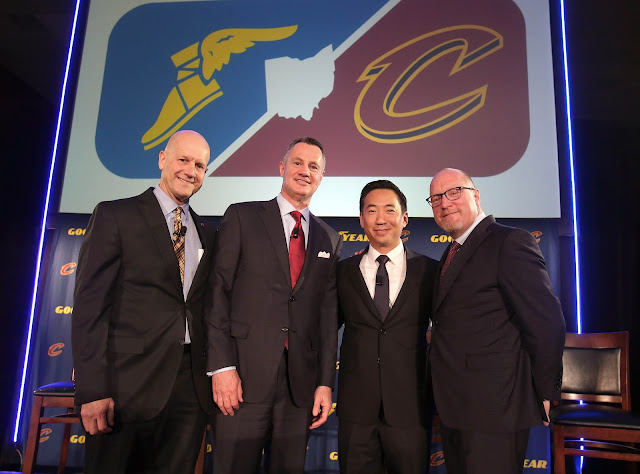 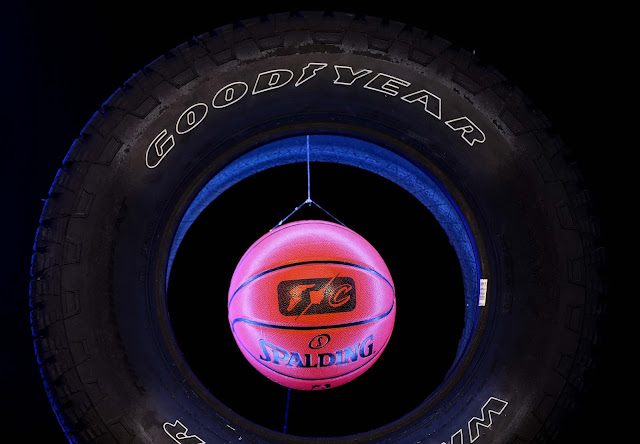 The agreement between Goodyear and the Cavs acknowledges and extends the home-state pride of the two organizations and their shared principles of drive, determination and a deep commitment to the community.

In addition to the Cavs, Goodyear will collaborate with Turner Sports, a national broadcaster of the NBA and the official media extension of this agreement, who will bring to life the power of  the jersey patch through custom branded content and advertising on TNT and other platforms. 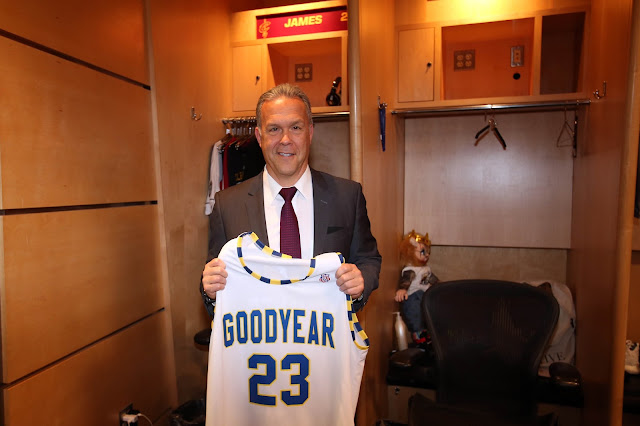 “This is a natural fit between two organizations rooted in Northeast Ohio whose strong brands have a global following,” said Rich Kramer, chairman, CEO and president of Goodyear. “Goodyear has always been connected to the Cavs from our blimp coverage to the tremendous passion of our associates for the team, and we’re excited to make this relationship even stronger.”

“It was just meant to be that a global iconic brand like Goodyear is our neighbor headquartered in Akron, Ohio, and shares the same DNA of basketball, community purpose and drive for success as the Cavs,” said Len Komoroski, CEO of the Cavaliers. “The treads and threads of this partnership are real, and we couldn’t be more proud to wear the Goodyear Wingfoot and come together to champion Northeast Ohio.”

“This partnership had to be something that our entire franchise, and specifically our team, believed in and can now be inspired by. Having the Wingfoot become part of the actual fabric of our identity does that,” said David Griffin, Cavaliers general manager. “The connection represents something deeper than basketball and is forged on a common platform to operate physically and culturally at the highest level. We can’t imagine a more appropriate partner than Goodyear, and the team will have a unique depth of pride wearing the Wingfoot on the court as we compete.”

“Every Akron kid grew up seeing the Wingfoot in the sky on the blimp and feeling pride in our community,” said Akron native and Cavs NBA All Star LeBron James.  “There is something special for me personally about having that logo on the Cavs uniform. Goodyear is also very supportive of the LeBron James Family Foundation.  I can’t imagine a better situation with our new Cavs jersey than bringing together Nike and Goodyear, two companies that mean a lot to me and my family.”


Nike will become the NBA’s official uniform supplier beginning with the 2017-18 season.

“This is an amazing partnership that brings together organizations that are at the top of their game,” said David Levy, President of Turner. “We are excited to work with Goodyear to amplify their commitment to the Cavs and celebrate the sports culture that binds together the Northeast Ohio community.”

The connection between Goodyear and the Cavs begins with shared roots, but the relationship also is linked to performance on the basketball court. In the 1930s, Goodyear was a founding member of the National Basketball League, a precursor to today’s NBA.  The Goodyear Wingfoots won the first NBL title in 1937.  The Wingfoots captured the AAU National Championship in 1964 with a team that featured three Olympic Gold Medalists: Richard Davies, Pete McCaffrey, and Naismith Memorial Basketball Hall of Famer Larry Brown. The Cavs famously cemented their own championship legacy with their first NBA title in 2016.

The Cavs and Goodyear also announced Monday that the relationship will yield a very special community benefit to schools in Cleveland and Akron. The Cavaliers, in conjunction with Goodyear, are funding $1 million of support to STEM (Science, Technology, Engineering and Mathematics) programs in the Cleveland Metropolitan School District and Akron Public Schools.

Both organizations have a long and deep history of supporting community initiatives in Akron, Cleveland and across northeast Ohio. This funding will expand their reach even further.

The Cavs sponsorship adds another global platform to Goodyear’s extensive position in sports sponsorships. The company is the official tire supplier of NASCAR’s top three series, the title sponsor of the Goodyear Cotton Bowl Classic and an official sponsor of the College Football Playoff and Pro Football Hall of Fame. Its fleet of Goodyear Blimps provide aerial coverage of the biggest sporting events across North America.