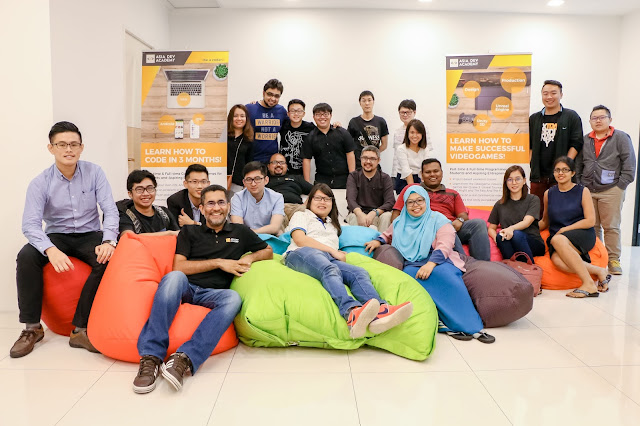 Asia Developer Academy (ADA) a joint venture between BAC Education Group and iTrain, hosted the graduation of its inaugural batch of Full Stack Web Developer students on the 29th of September, 2017. Held at its premises at the 13th floor of Menara VSQ in Section 14, Petaling Jaya, the students presented their projects and received their certificates from Bikesh Lakhmichand, CEO of the iTrain group of companies.

Proudly looking on were their trainers for the six month programme, Wan Muzaffar bin Wan Hashim and Syed Muzani bin Syed Ahmad Safri. The course entailed the graduates learning to code from scratch and culminated in them producing their very own web-based application.

The 13 students came from all walks of life and took the initiative to learn what they felt was a skill that they would need, to enhance not only their current occupations and qualifications, but also something that would give them the edge in everyday life. Most of those graduating and those enrolled in on- going classes have little or no coding experience. Keeping this in mind, ADA recruited trainers from the industry with experience in hands-on development themselves.

Among the graduates was Yu Chin, a university student who decided to build an app to organise her class timetable and has a function to enable communication between students, lecturers and tutors. Ken, who works in HR at an MNC, was motivated to understand the workings of web-based systems so  he could apply his knowledge at work and contribute positively in addition to his daily HR functions.

Another student, David, whose highest qualification before participating in the programme was his A- levels and who was earning his way as an Uber driver, successfully obtained a fulltime job as a developer usually given to undergraduate degree holders based on the content of the Web Application course and training.

ADA aims to be at the forefront of offering current and relevant courses in its commitment to contribute to developing a nation of ICT talents. With the resources and expertise of BAC Education Group and iTrain, its programmes are purposed at effectively providing the training and exposure that today's professionals need to learn and enhance the necessary skills to do so.

As such, ADA would like to invite organisations and individuals who have ideas that they feel could be turned into apps to contact its Academic Director, Deehba Lakshmayya, at 03-79600063 or
deehba@asiadev.academy. The ideas and concepts will be presented to our panel of advisors consisting of industry experts and developers before being shortlisted and assigned to the students as their projects for their course. Internships and placements are also available.