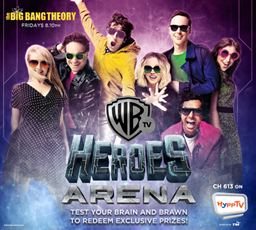 Warner TV, home of superheroes and legends, has teamed up with HyppTV to launch the Heroes Arena. Hosted at Sunway Velocity Mall from Friday, 27 October to Sunday, 29 October, the event will feature a series of obstacle courses that only the strongest and smartest will be able to conquer.

Open to all for free, the themed courses are inspired by Warner TV’s highly-rated series with new seasons that have just returned to the channel.
·         Lethal Weapon – Test your strength on the Lethal Weapon hanging bars. Make it to the other side without touching the floor.
·         Gotham – Flexibility and agility are needed for this activity. Climbing through a maze of tape, contenders will have to pick up the Gotham City Police Department badges (beware of the decoys!), and make it to the other side.
·         Arrow – This obstacle course isn’t all about speed. The Arrow game aims to test each contenders’ balance and accuracy at the same time.
·         Young Sheldon – Battling against the clock, contenders will need to use their problem solving skills to piece together a Young Sheldon puzzle as quickly as possible.
·         Blindspot – Testing endurance, contenders need to make their way up the inverted V-ramp without tumbling down the other side.

Also joining in the fun on Saturday, 28 October at 2pm will be Malaysia’s national athletes namely 2017 SEA Games high-jump gold medalist Nauraj Singh Randhawa and Syakilla Salni Jefry, national karate exponent. These athletes will be putting their endurance to the test in hopes of making it through the course.

Those who are unable to participate in the Heroes Arena can still take part in the fringe activities available on site, which includes The Big Bang Theory memory game and a Warner TV green screen photo booth.

In addition, HyppTV subscribers will also be able to enjoy an exclusive marathon screening of Warner TV’s best returning series including newly premiered series – Young Sheldon. Hosted at TGV Theatres in Sunway Velocity mall at 2-7pm daily, subscribers will just need to provide their UniFi account number to the TM sales promoter at the Heroes Arena in exchange for a ticket stub. The screening is open to HyppTV subscribers only and seats are non-transferable and are allocated based on a first-come-first-serve basis.

All attendees for this screening will receive a free popcorn set and for those who stay for more than hour in the theatre, more goodies await – they will be awarded an extra Warner TV premium.

So come one, come all! Head over to the Heroes Arena at Sunway Velocity Mall Main Atrium at 10am-10pm, 27-29 October (Friday-Sunday) to take part in the fun!

For more details on the Heroes Arena, please visit WarnerTVAsia.com or Facebook.com/WarnerTVAsia. Warner TV is available on HyppTV Ch. 613.