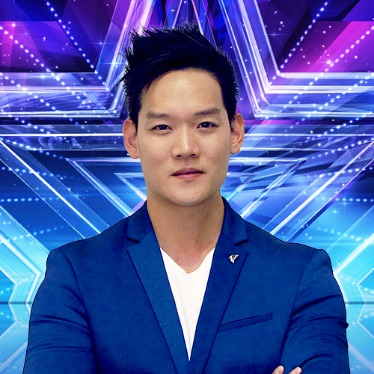 Andrew Lee, the illusionist and mentalist from Malaysia has made it to the semi-finals of Asia’s Got Talent Season 2! After a difficult decision-making process at the end of the Judges’ Auditions, David Foster, Anggun and Jay Park made their pick of the top 20 acts to join the four Golden Buzzer recipients in the semi-finals. Here are the first 8 semi-finalists:

Andrew Lee, the charismatic illusionist from Malaysia who threw a knife at show host Alan Wong made it through with his death-defying act. He has been performing for the past 13 years and hopes to perform in Las Vegas one day.

The Sisters, comprising siblings 10 year-old Anne-Sophie and 12 year-old Ariane, is a singing duo from Singapore who managed to clinch three yeses from the judges. David Foster was especially impressed with the talented performers, commenting that they were so good that they sounded like one person.
Power Storm Crew claims that they are the very first B-Boy group in Thailand. After years of being back-up dancers, they decided to form their own dance crew and be the main attraction.
Angela July touched the judges’ hearts with her singing and harp performance. She hopes to be a world-class performer, serenading audiences internationally. Angela is a full-time mother but works part-time performing in Jakarta, Indonesia.
Philippines’ beatboxer Neil Rey Garcia Llanes has the best redemption story after coming back to the Asia’s Got Talent stage for his second chance. He’s ready to go all out for this season.
The judges loved Filipino contemporary dancer, Deniel Sarmiento when he performed during the Judges’ Auditions. Coming from a family of dancers, Deniel has a lot to prove when he takes the stage in the semi-finals.
Ekklesia, the ‘popera’ singing trio from Korea was a surprise hit with the judges and audience. The three of them are hoping to stand out from the clutter of Korean-pop and craft their own destiny on Asia’s Got Talent.
The hosts’ Golden Buzzer pick, Canion Shijirbat illuminated the stage with his unique blend of choreography and graphic design. Will he be able to take his performance to the next level in the semi-finals?
In each semi-final episode, the eight acts will perform a dazzling new piece. At the end of each episode, the act that impresses the judges most will win the Judges’ Pick and head to the Grand Final directly. The seven remaining acts will be up for public voting, and the two acts with the most votes will head to the Grand Finals.  Voting starts next Thursday via Facebook Hashtag and Facebook Messenger and Google Search. For more information on voting, visit www.AXN-Asia.com/AGTVote.

The first semi-final episode of Asia’s Got Talent airs this Thursday at 8:30pm on AXN. To follow the journey of this season’s acts, check out #AXNAsia and #AsiasGotTalent.

Asia’s Got Talent is the 67th adaptation of the Guinness-World-Record-breaking hit “Got Talent” format, which was created by Simon Cowell’s Syco Entertainment and is co-produced by FremantleMedia. The “Got Talent” format is officially the most successful reality TV format in history and currently airs in 186 countries.

Asia’s Got Talent is supported by presenting sponsor Traveloka, the leading travel booking app for all flight and hotel needs; sponsoring partner Great Eastern Life, the market leader in the conventional life insurance business and the largest life insurer in Malaysia by asset size; and GoDaddy, the world's largest cloud platform dedicated to small, independent ventures.