on November 15, 2017
The stage play Music Box, starring Jessie Chung, is arriving in theatres in December! 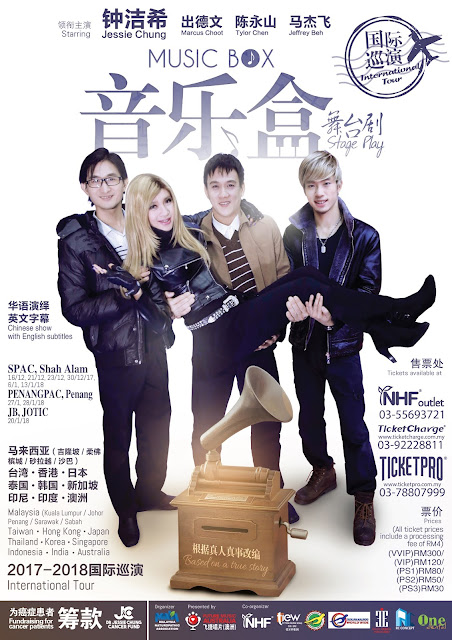 Music Box, inspired by a true story in 18th century England, which recounts a young lady’s experience with romance, friendship, and family, also incorporates Jessie Chung’s life journey and three relationships. Music Box is a gripping story that will strike and sensitize the audience’s soul.

The audition for the male lead was quite competitive. The original scheduled male lead, because of other obligations, couldn’t be involved in the stage play. The production team therefore had to meticulously choose a new male lead to fill in the spot. Ten finalists were chosen from nearly a hundred auditionees, and after various tests and screenings, the new male lead was born!

Jessie Chung, who is now in Australia completing her second doctorate dissertation also had to spend a great deal of time rehearsing her parts. She doesn’t dare to slack off. Jessie has written on Facebook expressing her mood, saying, “I guess I’m just so eager to put on a great show! It’s like a heavy burden crushing down upon my chest… whew! Everyone involved thinks that Music Box is a lot more demanding in terms of acting skills, compared to the previous stage play… Many difficult challenges await! I really hope that I can deliver the best performance so that you all can enjoy the show.”

The stage play Moonlight, which came out in 2016, was remembered as the show that broke the rules of traditional stage plays in Malaysia by throwing in film techniques and avant-garde theatrical effects in the mix. In supplementing the stage play with an LED stage and a high-quality stereo system, the story’s settings and surroundings were made more lifelike, and the audience was able to experience the story in a much more interactive way. The play was highly acclaimed by critics and viewers alike and easily sold out all tickets for ten shows. Highlights of the play included the performance of lead actress Jessie Chung, who was so imbibed in her role in this bittersweet tale that she earned the crowd’s applause at various moments of the show, which culminated to a standing ovation at the finale!

Let us cooperate together to raise cancer funds for cancer patients and do our part in bestowing love upon others.
entertainment