Fazura Engaged with her Fans during Neffos Meet & Greet Event 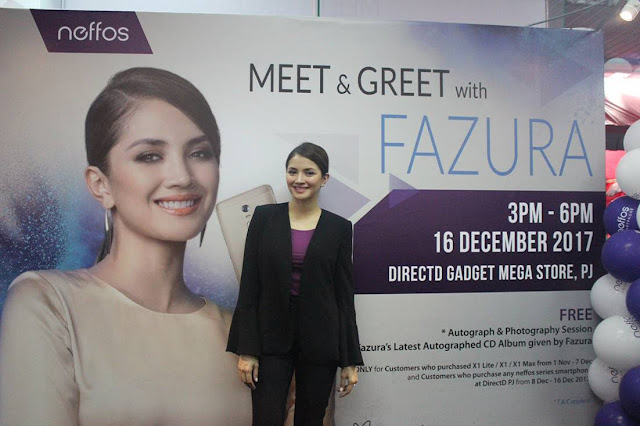 A special meet and greet autograph and photography session with Neffos ambassador Fazura was recently held at DirectD Gadget Mega Store, PJ in conjunction with the DirectD Mega Sale. Limited to only 100 fans who have purchased the Neffos smartphone throughout November and December 2017, the lucky fans stood in line for the rare opportunity to get up close and personal with their idol by getting her personalised autograph on her latest self-titled CD album and poster. In addition, the fans also received exclusive merchandises from Neffos Malaysia upon registration.


On top of Fazura’s special appearance, the three-hour interactive programme with the celebrity included fun games and activities with her fans. The audience won themselves more goodies from Neffos through a quiz and trivia session asked by Fazura herself along with Emcee Fixz. One of the highlights of the day was also the grand lucky draw where 5 chosen winners walked home with either TP-Link Bluetooth speakers worth RM169 each, Jabra Headset worth RM209 and the grand prize being a Neffos Y5L smartphone worth RM299.

“I am feeling blessed and proud to be the ambassador of Neffos Malaysia. It has been nothing but a sweet journey as the face of Neffos especially when I get to meet passionate fans such as at today’s event. I believe that the brand has gained huge recognition over the year with a bigger fan base and customer base today. No doubt there are so many smartphone brands out there now, but I personally believe that Neffos is the smartphone with good specifications and a friendly price for everyone.” said Fazura during a media interview on that day.

The joint event Mega Sale 2018 organised by DirectD Gadget Mega Store – one of Neffos Malaysia’s major dealers offered great discounts on the event day where the Neffos X1 Lite went on a special price of RM449 (RP: RM499). The sale period goes on until 2 January 2018 where customers who purchase any Neffos X series will also receive Fazura’s album and a RM10 Aeon voucher. While DirectD members will receive additional Neffos exclusive merchandises on top of the free gifts offered during this extended promotion.

Neffos Malaysia believes in reliable, stylish and reasonable priced smartphones for consumers who want to enjoy high specifications within a friendly budget. Emphasising on suitability and affordability, one can also get themselves a Neffos here: http://www.neffos.my/where-to-buy