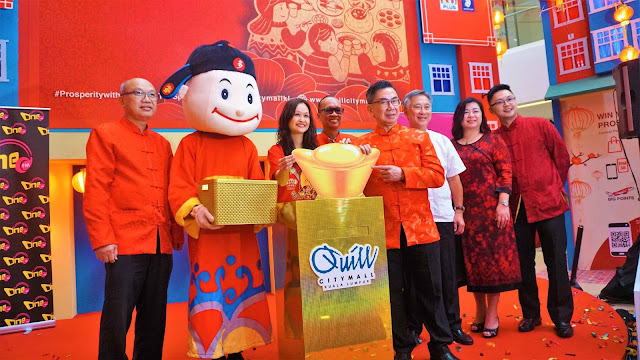 Quill City Mall Kuala Lumpur, in collaboration with 8TV CNY Mini-Series: Singing In The Spring and Tonton Singing In The Spring: The Movie” has transformed its Main Atrium into a New Year home atmosphere which is inspired by the drama series for shoppers to experience the culture of apartments in Malaysia. The setting of the mall’s Main Atrium is decorated with red lanterns to enhance the Chinese New Year atmosphere. Furthermore, shoppers get to experience a return to hometown atmosphere to celebrate Chinese New Year whilst bringing a more prosperous and harmonious New Year to unite everyone by singing in the spring. 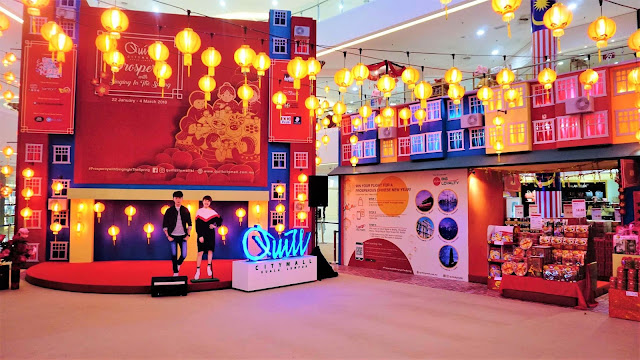 The Singing In The Spring drama mainly revolves around different dialect groups and it is a family orientated comedy that brings togetherness, happiness and joy. Quill City Mall KL has adapted the scene from the actual Happiness Apartment atmosphere featured in the drama series into the Main Atrium of the mall to provide an atmospherically fulfilling experience for shoppers. The drama features local artists and actors such as Haoren, Orange Tan, Rickman Chia, Jordan Sen, Emily Chan, Loo Aye Keng, Eric Chen, Jacky Kam, Vicky Tan, Joey Leong, Gary Yap, Natalie Ng, Pauline Tan, Sherlyn Seo, Lynn Lim, Wilson, Lee, Ziah Zhang, Wind Lee, Chrystina Ng. The story revolves around three families of different origins: Cantonese family, Hakka Family and Hokkien family from Happiness Apartment who are working hard to earn their living. Chinese New Year is approaching and they have forgotten the true meaning of the New Year; their goal of life is towards money. Unlike the previous years, this year, CNY singing competition "Wonderful New Year 2018 Singing Contest" is back with great rewards. For the sake of a one million cash prize, everyone became eager to participate in the contest. Everyone fought against each other so they could win the competition for the sake of the monetary reward. However, along the way, they learned to care for each other instead. They stopped their unfriendly behaviour and learned to compromise and work together. The Chinese New Year songs resembled a time machine that brings everyone back to their carefree youth and childhood where life is filled with joy and happiness. All these happenings awakened their hopes and desires to look for true happiness that were once buried deep down in their hearts. 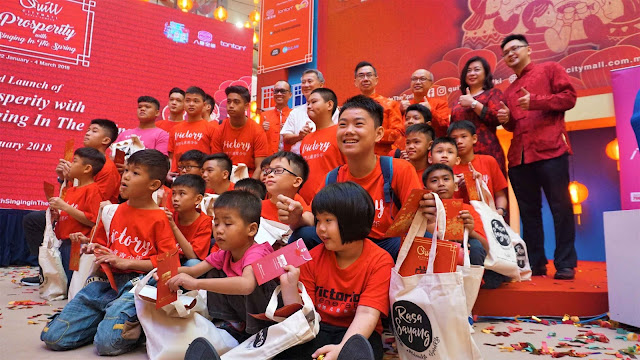 “This year, the mall’s Chinese New Year campaign, ‘Prosperity with Singing In The Spring’ commences from 22 January 2018 until 4 March 2018 in Quill City Mall KL. The mall will remain open throughout Chinese New Year to spread the joy among all parents as well as children so that every adult and child are smiling this New Year. We sincerely invite families to come and experience Prosperity Playland, a playland for everyone regardless of age. We have also prepared a carnival games to double the happiness for everyone. In addition, during the Chinese New Year and School Holidays, I am pleased to announce the first circus will be held in Quill City Mall KL, The Greatest International Circus from 3 February 2018 to 31 March 2018; to give everyone a chance to watch stage acrobatics, aerial acrobatics and magic shows," said Dato' Ar. Michael Ong, Group Executive Director of Quill Group of Companies.

How long you have not been to a circus? For the first time, the prestigious Greatest International Circus is here to entertain the public in Kuala Lumpur City Center. The venue will be set up exclusively for guests at Quill City Mall KL. The show will be open every Monday to Thursday at 8:30pm whereas on Friday, weekends or even during public holidays, there are two shows per day at 5.30pm and 8.30pm respectively. Entry tickets are VIP, Hot Seat and Standard; the fare is RM80, RM60 and RM30. Children under 12 years old will receive half price concession. Shoppers who spend at Quill City Mall KL can also redeem RM20 discount vouchers to purchase VIP or Hot Seat entry tickets upon producing their receipt to our Concierge Personnel at our Concierge Counter, Ground Floor. This New Year will surely bring you a new experience. Each stunt is challenging, exciting and entertaining which will leave the audience in awe of the professional acrobats and stunts.

Interesting programs are lined up in the mall this Chinese New Year with special casts appearance of Singing In The Spring who will be appearing on selected dates in Quill City Mall KL. Many face-to-face meetings and campaign activities are to be held for the public to interact closely with the actors and actresses by playing games, hear the casts sing Chinese New Year song and the drama theme song. A Grand Launch of “Prosperity with Singing In The Spring” was held on 27 January 2018 at 1:00pm, a CSR initiative by the mall for 30 underprivileged children from Rumah Victory, followed by “Singing In The Spring” Meet & Greet on 10 February at 3:00pm, and “GoGo Wonderful” CNY Album Promo Tour on 3 February at 2:00pm, “GoGo Wonderful” Mobile Truck Activation on 3 February at 3:00pm and “Singing In The Spring: The Movie” Special Screening on 3 February 2018 at 3:00pm. Customers and fans can take pictures with their favourite actors as well as actresses and enjoy an early start to the New Year’s festive season at Quill City Mall KL.

In partnership with AirAsia BIG Loyalty, The Official Mall Loyalty Partner, shoppers can also participate in the Chinese New Year giveaway “Win Your Flight for a Prosperous Chinese New Year” lucky draw through a minimum spend of RM38 in a single receipt at any outlet in Quill City Mall KL for a chance to win a pair of return flights to Beijing, Shanghai, Macau, Hong Kong or Taipei and earn AirAsia BIG Points. Contest period starts from now to 4 March 2018. Besides, shoppers get to redeem 2 BIG Points for every RM1 spent on weekdays and 1 AirAsia BIG Point for every RM1 spent on weekends at any outlet in Quill City Mall KL. Members can accumulate points in exchange for air tickets, starting from 500 AirAsia BIG points. T&C apply.

Come to Quill City Mall KL to watch Singing In The Spring: The Movie” Special Screening happening on 3 February 2018 at GSC!