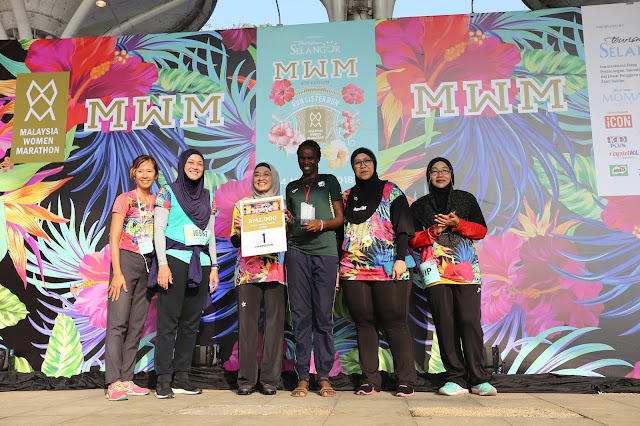 Women from all walks of like, young and old, put on their running shoes to run as a celebration to their individuality and sisterhood. Organised for the sixth consecutive year, runners returned to the race this year with the goal to improve their time and to also take the challenge of running a longer distance. For many, this is an event that have been waiting for the past year as it is purely for women and it gives them an opportunity to test their limits while supported by other women who share the same passion for running. 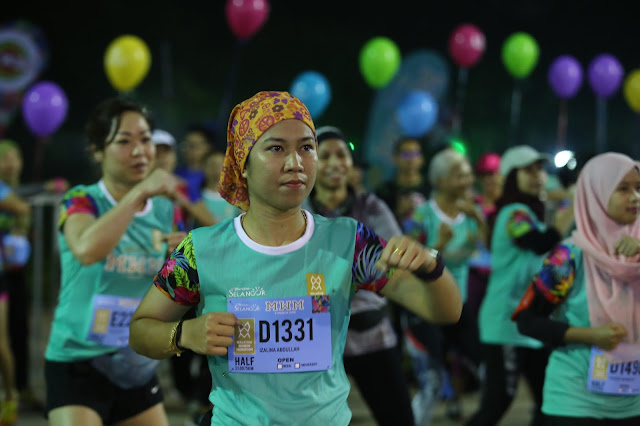 The 3 days event had several sidelined activities which started during the race kit collection day located at SACC Mall, the Blackbox. A little expo with 26 exhibitors with Garmin and Key Power International as international brand in the expo. Malaysia Women Marathon works closely with Malaysian brands that are founded by women in sorority support and development.

“It is important for MWM to develop together with these brands.  Nashata Lifestyle, the homegrown sport hijab has been with us for 5 year and in this 5 years it has grown internationally with a steady base of followers from Dubai to Indonesia. Marathon baker is another homegrown brand by women for women. This year we are fortunate to work with Woom drive,  a home grown ridesharing app drive.”

Every year, during the race kit collection, the organizing committee will select a talk session on issues that is relevant to women from health issues to gender equality issues. The Malaysia Women Marathon 2018 was selected to be part of the international program to herald in a new International HPV Awareness Day which falls on the 4thof March 2018.  A talk was held in conjunction with the International HPV Awareness day on the 3rd of March2017. Special speakers including Prof Dr Woo Ying Ling from University Malaysia Medical Center, were invited for speeches that culminated in a soft launch to mark the awareness day.

It was not surprising that there was a one -minute silence called by the organisers in light of the passing of Evelyn Ang Loo who was knocked by a car  in a marathon held at Klang last year. The organizer, Iron girl Malaysia Sdn Bhd took the extra effort to ensure that there was more cones and water barriers used for the event to demarcate the running zones for the runners.

With the help of Standing Committee of Tourism Environment and Consumer Affairs for Selangor, there were more than 4,500 traffic cones and water barriers used during this event.

“Selangor is privileged to be a part of the inspiring race, which consist of all-women and it is an honour to host such a momentous marathon. We welcome everyone from all over to Selangor in celebration of women in marathon.” Said Yang Berhormat Elizabeth Wong, the Executive Committee of the Standing Committee for Tourism, Environment and Consumer for Selangor.

Irongirl Malaysia Sdn Bhd is one of the organisers who hold the license from the Sports Commissioner of Malaysia as a legal organiser for road races.  With the help of the Selangor Amateur Athletic Association and the Standing Committee of New Generation and Sports of Selangor,  there was effort and steps taken towards safety measures for the runners.

“Tourism Selangor is looking forward to support MWM’s in every year basis. The MWM’s plays a crucial role to attract domestic and foreign tourist to Selangor. Besides that, it’s getting bigger, wider connection and well established event in Selangor State Official Calendar. Tourism Selangor is willing to give full commitment to make sure the event is well organize and success” said Puan Noorul Ashikin Mohd Din, General Manager of Tourism Selangor.

YAB Datin Seri Shamsida binti Taharin, Wife of Dato’ Menteri Besar Selangor also honored the winners at the prize-giving ceremony.The Champion for the full marathon distance this year took home a cash prize of RM2,000.00 whilst the Half Marathon champion went home with RM1,200.00. The winner of the 10km awarded a RM900.00 cash prize. As part of the event, the winners will be appointed as Garmin Ambassadors and will be provided a complimentary slot to an international marathon representing the Malaysia Women Marathon group. ​​​​The event ended with more than 60 runners winning lucky draw prizes.