ZENJIRO the Award Winning Comedian & Actor is Heading to Malaysia 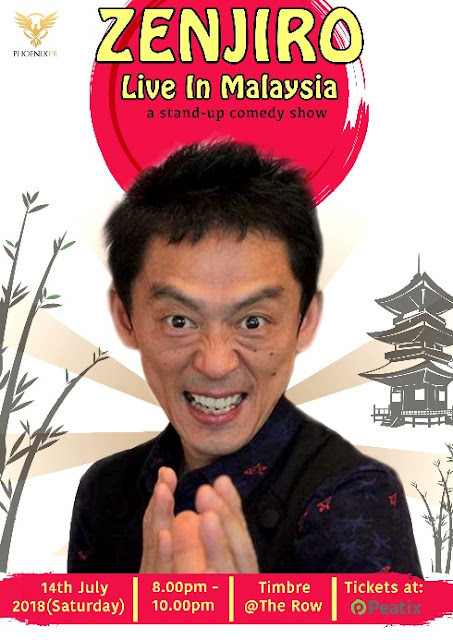 Zenjiro is more than just a household name in ‘The Land of the Rising Sun’, he is one of Japan’s biggest names in comedy, and to the delight of his Malaysian fans, the multi-faceted funny man will be headlining a stand-up comedy show titled, ‘Zenjiro Live in Malaysia’ at Timbre Kuala Lumpur, on the 14th of July from 8:00pm to 9:30pm.


The show will feature Zenjiro’s unique blend of self-deprecating comedy and his satirical take on popular Japanese stereotypes and nuances. Joining him on stage, will be several local and foreign comedians, collectively guaranteeing a laughter-filled Saturday evening.

Zenjiro has hosted numerous TV programs in Japan and was also featured in TV shows such as Just for Laughs, Ed Byrne Comedy Gala, and Japanorama (presented by Jonathan Ross) on BBC; US Comedy Arts Festival on HBO; and Raymann is Laat on Dutch TV channel NTR.

“The overwhelming response to my first performance in Malaysia, in 2017, made me eager to return. Not only is there a large Japanese expatriate presence in Malaysia, the love for Japanese arts and culture shown by the locals, makes me feel very welcomed. I am excited to perform my latest jokes, and have a great time with the audience,” said Zenjiro.

Tickets for ‘Zenjiro Live in Malaysia’ are priced at a meager RM 80 and can be purchased online at http://zenjiroinkl.peatix.com. For more information on the show please visit https://www.facebook.com/PhoenixPRMY/. This stand-up comedy show is organized by Phoenix PR, and Timbre Kuala Lumpur.