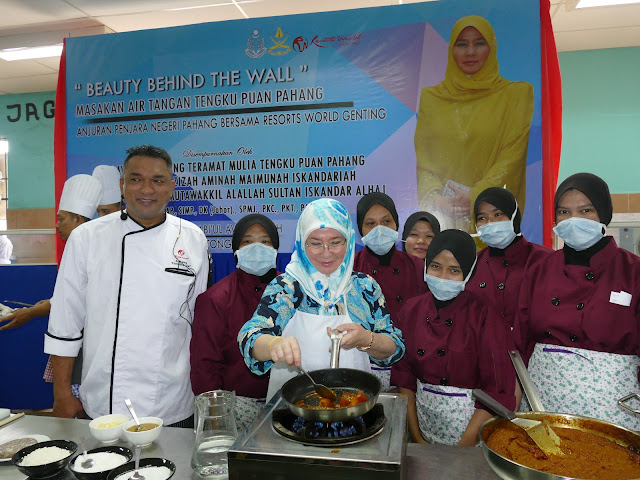 Everyone deserves a second chance. Kebawah Duli Yang Teramat Mulia Tengku Puan Pahang Tunku Hajah Azizah Aminah Maimunah Iskandariah Binti Almarhum Al Mutawakkil Alallah Sultan Iskandar Alhaj certainly believes that, as Her Royal Highness directed the creation of a programme dedicated to rehabilitating female inmates through culinary skills. Announced during the Program One Touch Wanita, Masakan Kasih Sayang Dan Perniagaan event in October 2018, the auspices of Her Royal Highness saw the inmates of Bentong Prison equipped with work skills meant to be useful to them when they are re-integrated into wider society. 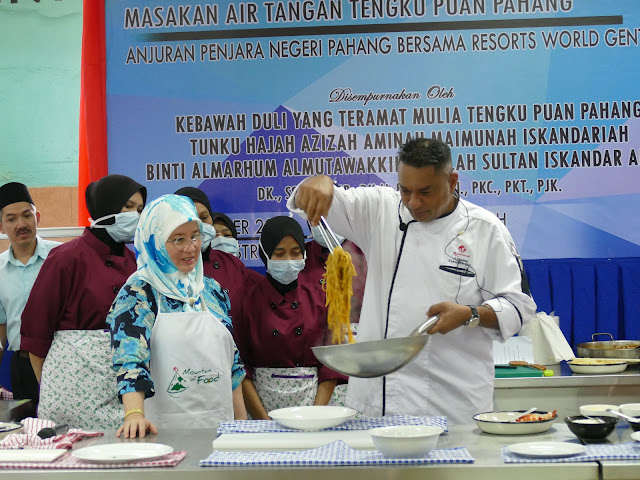 Titled ‘Beauty Behind The Wall’, the programme kicked off on 25 November 2018 at the Bentong Prison’s Pastry Workshop, supported by Resorts World Genting. The event was attended by Ybhg. KP Dato’ Ab Basir bin Mohamad (Pahang State Director), Ybhg KP Dato’ Abdul Aziz bin Abdul Razali (Director of Pahang State Prison), Ybhg KJP Dato’ Sakeri bin Haji Dollah (Director of Vocational and Industry Division) and Ybhg KJP Dato’ Sri Haji Zulkifli Bin Omar (Director of Malaysian Prison) along with Ms Katherine Chew, Vice President of Resort Communications and Public Relations and Executive Chef Alex Vitalise of Resorts World Genting. Focusing on educating female inmates and female staff of Bentong Prison, the programme covered issues such as food hygiene, kitchen management, culinary technology, dietary nutrition, recipe commercialisation and food industry opportunities, all in the name of ensuring that the inmates have opportunities to support themselves once released. The Bentong Prison prides itself on its Pastry Workshop that supplies the products produced by the inmates to external parties such as donuts, ‘muruku’ and cookies that channels the income back to them.

“What we are doing here is to give the prisoners hope and to broaden their views on opportunities after leaving the prison. We want to give them training while they are here and get their mind active in contributing to the society and at the same time having sustainable income. This is very important as we want them to be useful and accepted by the society. We hope this pilot project and initiative by the Malaysian Prison Department and support by Resorts World Genting will bear fruit. If it is successful we hope to expand this idea to other prisons in Pahang and maybe other prisons in Malaysia in the future as well.” said Her Royal Highness.

Recipes from Her Royal Highness’ cookbooks - ‘Air Tangan Tengku Puan Pahang – Masakan Tradisional Pahang’ and ‘Air Tangan Tengku Puan Pahang – Manisan Tradisional Pahang’ was the basis of the programme, with specific reference to producing simple base pastes and sauces that could provide an immediate source of income. At the kick-off event, Chef Alex Vitalise conducted a cooking demonstration with Her Royal Highness that covered simple and effective recipes to create a total of eight dishes such as pasta and codfish using rendang and asam pedas pastes.

This is in line with Her Royal Highness’ directive to equip the inmates with the ability to cook simple Western dishes common to many food outlets in Malaysia that are adaptable and modifiable to a variety of Asian tastes. Nineteen inmates participated in the programme where they saw firsthand how the recipes were created and were even personally spoon-fed the dishes by Her Royal Highness as she and Chef Vitalise interacted with them and heard their stories