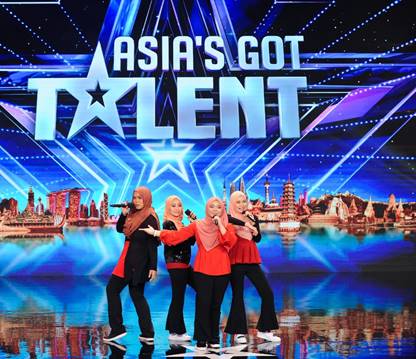 There have been many singers in this season of Asia’s Got Talent but there’s not one like NAMA, an all-girl group from Malaysia. Decked out in hijab, the four ladies gave the performance of their lives as they sang Lady Gaga’s Bad Romance and received a standing ovation from the audience!

“I have never seen a group of four beautiful women in hajib performing like this. We need a group like you and I love the song choice,” Anggun praised.

“You guys are like the modern-day Malaysian version of The Supremes!” Jay Park said.

The members, Nur Fazrina, Noor Syamimi, Norfazira and Nur Farahida met in 2016 when they were studying in the University of Malaya in Kuala Lumpur. They bonded over their love for music and started performing to prove that strong women can have ambitions.

While David Foster was not impressed by their singing abilities, NAMA received two yeses from Jay Park and Anggun and they will be in the running to appear in the semi-finals.

To watch extended highlights of Asia’s Got Talent and exclusive behind-the-scenes footage, fans can subscribe to the official AXN Asia YouTube Channel at www.YouTube.com/AXNAsia.
entertainment