STP and Sunway Uni Ink MoU Towards the Furtherance of Academic, Education Opportunities 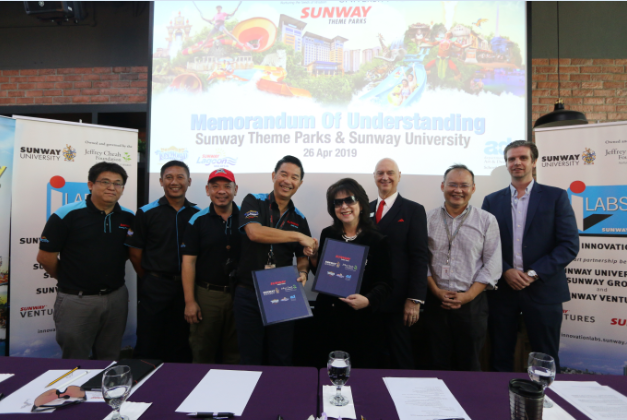 The signed Memorandum of Understanding will see the development of educational programmes between Sunway Theme Parks and Sunway University through a series of specially designed projects which will include hosted speaker series of lectures at Sunway University by multi-disciplinary representatives from Sunway Theme Parks which comprises Sunway Lagoon and Sunway Lost World of Tambun.

The venture will also see the creation of study trips by students of Sunway University to both STP’s themed parks and networking opportunity collaborative projects specially developed to spearhead transparent conversation and promote the sharing of ideas, towards essential preparation for future careers in the entertainment, leisure, hospitality, tourism and other industries.

Through internship opportunities, the collaboration will also provide students of Sunway University with tangible opportunities to experiment with and realise their ideas in a fully-functioning real-world setting. Meanwhile, the undertaking between Sunway Theme Parks and Sunway University desire to promote on United Nation’s global Sustainable Development Goals (SDGs) through the creation of edutainment platforms.

Speaking on the collaboration between the two organisations, Calvin Ho said, “This MoU demonstrates the commitment of Sunway Theme Parks, through Sunway Lagoon and Sunway Lost World of Tambun towards furthering educational and academic opportunities in Malaysia, built upon the strong foundation of the already existing symbiotic relationship shared by Sunway Theme Parks and Sunway University.”

Earlier this year, Sunway Lagoon had a first-phase design collaboration with Sunway University’s School of Arts and Design with the objective to nurture innovation among young students. The students worked closely with the theme park's retail team and developed "The Amazing Sunway City" creative merchandise. It is a collection comprising of 7 product designs to promote the destination and are currently available at Sunway Lagoon's retail outlets. There was also an additional collaboration between the university and a lifestyle photographer at Sunway Lagoon.

Calvin Ho highlighted, “Performing Arts and Drama Students from Sunway University are also recruited on an annual basis for Sunway Lagoon's Nights of Fright event, Malaysia's largest Halloween Festival. A lot of effort goes into the process of creating these horror characters and the students will undergo an extensive 40-hour “Scare Actors” training programme conducted by experienced international trainers. Unlike a Broadway performance where members of the audience sit back and enjoy the show, the scare actors here have a 360-stage with a moving crowd and this require great interactive skills.”

Meanwhile Sunway Lost World of Tambun (LWOT) has been initiating SDG programmes such as the collaboration with Sunway Youth for Sustainable Development society to create Malaysia’s first man-made Marmoset Island created using recyclable items. LWOT has also worked with Sunway University to conduct educational environmental workshop sessions at a couple of Q-dees centres in Perak, to raise awareness on the significance of waste management and conservation.

“We are truly excited to be working with them yet again on this exciting venture which will see the development of students through a wave of cross-institutional and interdisciplinary projects. This collaboration will specifically focus on three key areas, namely the creation of educational programmes, the empowering of Sunway University students to enhance guests’ experiences at Sunway Theme Parks and of course, the establishment of internship opportunities,” he added.
Meanwhile, Dr. Elizabeth Lee said, “It is always exciting to see organisations such as Sunway Theme Parks, through their highly established and world-renowned themed parks, work with us towards the effective furtherance of the academic experience of students at Sunway University. Indeed, Sunway University and Sunway Theme Parks have developed a long-standing and mutually beneficial working relationship in the past and today’s MoU signing is yet another natural step in the right direction, of which I am confident that the sum will be greater than the parts.”