Posted by pamela yeoh on June 02, 2019
In the fifth edition of the BMW Safety 360° Programme, BMW Malaysia has partnered with Childline Foundation – a non-profit organisation focused on the awareness and education of child safety and protection, to launch ‘From Day One’. The campaign aims to advocate the importance of child car seats, especially for newborns.

With the support of Chicco Malaysia, BMW Malaysia will gift a child car seat to the first six babies born on Father’s Day at Hospital Putrajaya. The new parents will also learn about the best child safety practices from Childline Foundation’s passenger safety consultants. These include the right criteria for choosing a child car seat, proper methods for installation, as well as the lifecycle of a child car seat.

Harald Hoelzl, Managing Director of BMW Group Malaysia said, “Since 2015, the BMW Safety 360° Programme has aspired to advocate safety values to keep drivers, passengers and road users safer on our roads. With ‘From Day One’, we want parents to realise the urgency of protecting their babies from the moment they leave the hospital. We also hope to educate them on the correct installation and usage of child car seats.”

"This festival season – whether during Hari Raya or the Kaamatan and Gawai Festivals – we want to remind all parents traveling on the road, whether short or long distance to make sure their children are in the right child car seat. This is as important as ensuring we have our seat belts on too, ensuring everyone is safe on the road for the festivities.” said Harald.

As part of the campaign, BMW Malaysia and Childline Foundation are also sharing key information parents should know to keep their children safe during their travels this Balik Kampung season.

The child car seat tutorial video can be viewed HERE.

This is followed by the human crash; when the human body moves toward the point of impact at the vehicle’s original speed due to momentum – coming to a complete stop when it hits a seat belt, an airbag, or the car windscreen if not buckled in securely.

The third crash is the internal crash, whereby a person’s internal organs are still moving forward until they hit the bone structure of the body.

The fragility of a child’s body makes children the most at-risk passengers in a vehicle. As seat belts are not designed for infants or young children, the optimum protection would be child car seats. When correctly installed and used, child car seats can reduce infant death in car crashes by 71% and toddler deaths by 54% .

Within the shell are energy-absorbing foam and padding that hug the child’s body; they are also known as side impact protection. This mainly protects a child against side collisions, especially the head.

The five-point harness which is designed to hold the child in place also helps to distribute the force during a collision. The five points of contact are both shoulders, both hips and between the legs. This differs from vehicle seat belts, which are designed for adult proportions.

Infants and toddlers should ride rear facing until at least 13kg or 15 months old. For better protection, opt to remain rear facing until the maximum weight stated on the child car seat or when the child’s head reaches the top of the shell, whichever comes first.

Parents can move their children to seat belts only when the child passes these five steps: 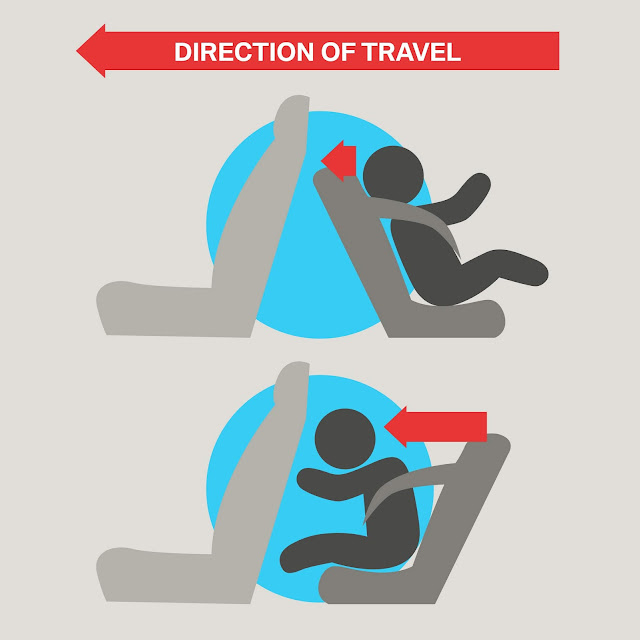 A forward-facing car seat, meanwhile, does not distribute force nearly as well. During a collision, the child’s body will be held back by the five-point harness. However, the head will be thrown forward and this could possibly result in severe neck injury. 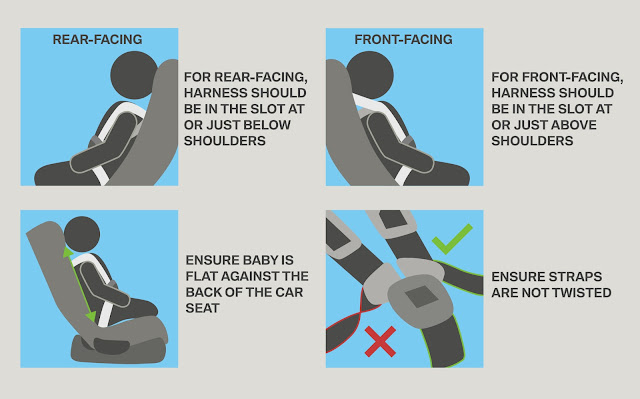 After harnessing the baby into the child car seat, parents should conduct the two-finger test. Simply slide two fingers under the pad by the collarbone and rotate the fingers by 90ﾟ. If the fingers can rotate, then the harness is still too loose and should be tightened.

Mandatory child car seats by 2020.
Transport Minister Anthony Loke Siew Fook has announced that child car seats will be made mandatory for all private cars from January 2020.

According to World Health Organization (WHO), a child up to 4 years of age has an 80% lower risk of injury in a rear-facing seat and for children aged 5 to 9 years, child car seats reduce injury by 52% . In conclusion, Hoelzl said, “We look forward to the increase in use of child car seats as enforcement comes into effect. However, we want to remind all parents that the use of child car seats can begin now as it is better to start protecting their children sooner than later.”

In view of the increasing number of influenza cases in Malaysia, Antabax and KPJ Ampang Puteri Specialist Hospital are working together on the Always Be Clean (ABC) for Health hygiene campaign, with the goal of raising awareness among Malaysians on hand hygiene. The Ministry of Health Malaysia advises the public to practice high levels of personal hygiene, frequent hand washing with soap and water, or with hand sanitiser, observing correct sneezing and coughing etiquette, and following a healthy lifestyle. According to Ms Vivian Lee, Senior Brand Manager of Antabax,  keeping hands clean is one of the most important steps to avoid falling ill, and reducing the spread of communicable diseases to others. “Antabax swung into action upon receiving alerts on the increase in influenza cases. We have been working with the relevant authorities to promote better hygiene habits for over a decade, and are glad to collaborate with KPJ Ampang Puteri Specialist Hospital to educate th

McDonald’s Malaysia recognised for its Commitment to Talent

McDonald’s Malaysia was recently accorded four prestigious Human Resource awards, spanning the month of November. The company’s accolades included the Best Employer Award 2019 and Commitment to  Talent Focus Award 2019 by Kincentric; Best Company to Work for in Asia 2019 Award by HR Asia; and Malaysia’s Most Improved Healthiest Workplace for Large Organisations by AIA Vitality. These acknowledgements are a testament to McDonald’s continuous commitment and efforts in engaging and building their talent holistically, as well as its strong people practices. “Our people have always been our priority – they are the very reason for McDonald’s Malaysia’s success today. Being acknowledged by Kincentric, HR Asia, and AIA Vitality is truly an honour, as we continue our journey of building a strong brand that always puts its people first,” said Managing Director and Local Operating Partner of McDonald’s Malaysia, Azmir Jaafar. At McDonald’s, opportunities are in abundance for its people