Posted by pamela yeoh on August 08, 2019
Mobile Legends: Adventure hit Malaysian shores on 1 August 2019 and since then, it’s been making waves upon waves. To date, the game is the No.1 Download across Malaysia, Philippines, Singapore, Indonesia and Cambodia. Over 6 million people have downloaded the idle RPG strategy card game..

There is no stopping the Mobile Legends: Bang Bang (MLBB) sequel, and game enthusiasts, bloggers and influencers are taking to their social media accounts to show their love – especially towards the amazingly fun new feature! Dogie, Soloz, Bexed, Choox TV, and Angelyn "Angelina Hirawan" are a few that have been live streaming their play of Mobile Legends: Adventure. They have garnered upwards of 6.4 million views worldwide, but what is the topic of their fascination and why is it gaining more and more views?

The influencer who comes upon the Wishing Shrine is challenged to summon a Hero. Will she go as far to score an Epic Hero?

Gamers might be familiar with a stage of the game where Summoning at the Wishing Shrine allows players to receive Heroes. But what they are now discovering is that they have to doodle their best to summon their desired hero, or end up with a low level warrior!


Drawing skills, or any form of creativity are put to the test – pushing some of the gamers to their wits end. They may summon anything between low-end troops or Mage level characters to 5-Star Heroes, and game watchers are put in anticipation of the Influencer’s hilarious reactions when they are rewarded their low level warrior or rejoice when they receive an Epic Hero. 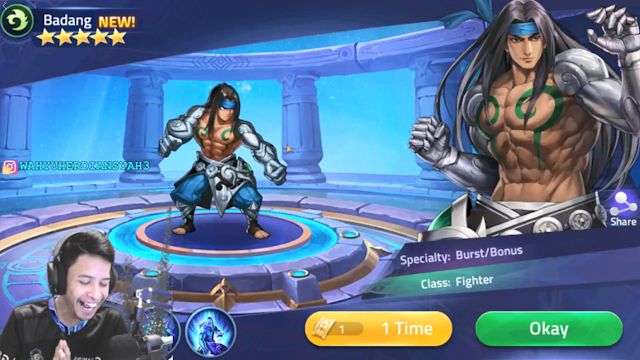 Caption: Surprise yourself with a Hero based on your drawing skill, like this Influencer who finessed himself Badang!
Originally, all three types of summoning at the Wishing Shrine: Premium Summon, Miracle Summon and Friendship Summon, requires players to draw figures or even write down their wishes to charge up the crystal and activate the summoning process. What the developers of Mobile Legends: Adventure have done recently is added a new feature utilising the Gacha system, allowing gamers to draw directly on their screens figures or doodles to summon to their most desired Hero.
Fans are experiencing a whole new world of their favorite heroes and this bedazzlement is not going anywhere anytime soon. The challenge is great and anyone could be the person to crack the code and find out what pattern will summon the best heroes.
So, what are you waiting for? Try your luck and doodle your way to win the legendary battle for the Land of Dawn! Mobile Legends: Adventure is available for download on Google Play Store and Apple Store. Gamers with a prior account can still access the game. Visit https://www.facebook.com/MobileLegendsAdventure/ for news, updates and more directly from the developers!