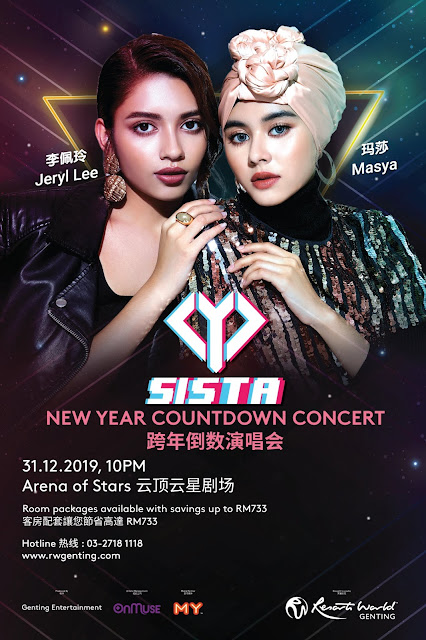 Captivating the hearts of audiences in Malaysia and abroad, the two 19-year-old singers will be showcasing their vocal prowess at the Arena of Stars on December 31 at 10pm.
The concert title “MY SISTA” was chosen to represent Jeryl & Masya’s multiracial friendship. Drawing on the two singer’s bond, the countdown concert will gather their combined young fan bases for one night of camaraderie, as they welcome the New Year in uplifting spirits.
Jeryl and Masya each catapulted into the limelight after impressive performances on reality singing competitions and recently collaborated on The Left Shoulder. The track was produced by the Chinese Embassy to commemorate the 45th anniversary of diplomatic ties between Malaysia and China.

With over 194k followers on Instagram (@jerylleex), Jeryl first made her mark on “Sing! China”, the country’s equivalent of “The Voice”, in 2016, where she emerged top six under the guidance of Chinese vocalist and judge Na Ying.

In 2018, Penang-born Jeryl was the recipient of the Malaysia PWH Music Award, which recognises talent in the local Chinese music industry. Signed to On Muse, Jeryl has released her first mini album Say Listen which includes tracks like Trap, Say, and MAMA, a song dedicated to her mother.

Catch Jeryl and Masya exemplify sisterhood and solidarity through music when they take the stage live at Arena of Stars, Resorts World Genting on December 31.

Genting Rewards Card members can enjoy a 10% discount through the Genting Point Redemption and cash/credit card – applicable for VIP-PS2 only.

All seats are numbered, while children below the height of 95cm will be eligible to standard Child ticket priced at RM50 without a seat. Late arrival may result in non-admittance until a suitable break in the performance.