on December 03, 2019
Malaysian students were given an opportunity to once again showcase their artistic talents at the Usaha Tegas Heritage Art Competition 2019.

The Usaha Tegas Heritage Art Competition is organised annually by Usaha Tegas to encourage young artists to pursue their passion in the arts as well as cultivate a love for Malaysian heritage. Marking its 20th year, the Competition has since garnered great support from students nationwide. The Competition witnessed two winning entries from Sabah despite it being only the second year of participation for artists from the state.

This year’s edition saw 264 artworks from a total of 27 higher-learning institutions across the nation vying for the top prize. The overall quality of submissions for the 20th edition of the Competition has truly impressed the judges, with the winning entries combining strong narration of the subject matter with sound technique to produce striking visuals that expounded on the theme ‘A timeless expression’.

Mr. Sivam Kandavanam, Director of UTSB Management Sdn Bhd, together with Ms.Maureen Toh and Mr.Lim Ghee Keong presented prizes worth a total of RM74,000 to all winners. 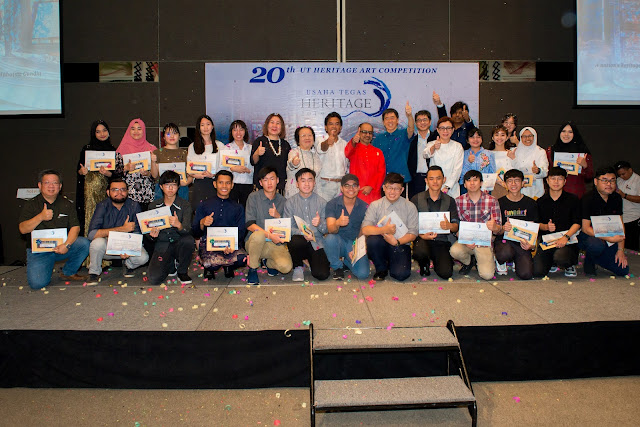 Mr.Sivam said, “This year’s prize giving ceremony is made all the more memorable as we commemorate 20 years since the inception of the Competition. The competition has been encouraged and supported by our honourable Chairman Mr. Ananda Krishnan since its establishment to this very day. As a passionate patron of the arts himself, Mr. Krishnan saw the value in encouraging the elevation of artwork produced by young Malaysians while instilling a deep sense of appreciation for our beautiful, diverse Malaysian heritage.” 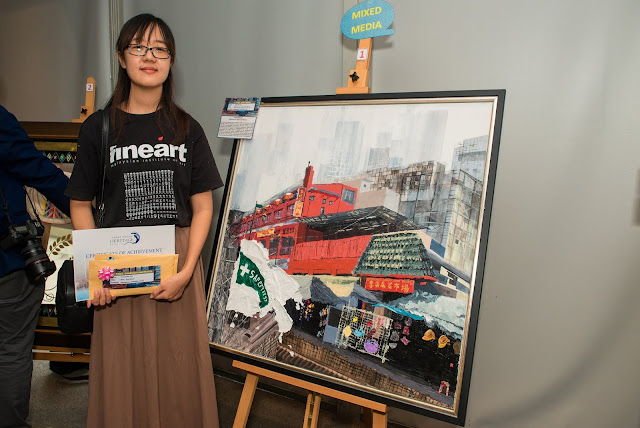 “Moreover, we could not have attained this milestone without the support of the judges, participants, institutions of higher learning, organising committees, members of the press, as well as our numerous well-wishers from near and far.”

He also added, “What makes the heritage of our beloved nation stand out is the sheer variety of what it encompasses, all originating from the melange of influences that have coexisted harmoniously in Malaysia all these years.”

“Through this competition, we continuously aim to impress upon our future generations, the importance of valuing and preserving the rich heritage of our nation through art.”

During the event, guests were able to view the winning artworks that were exhibited as well as speak to the talented young winners.

Yong Hui Lin from the Malaysian Institute of Art was the only contestant to win two prizes, winning first prize for the Mixed Media category and second prize for the Charcoal/Pencil/Ink category.

Yong Hui Lin commented, “I would like to thank Usaha Tegas Sdn Bhd for providing young artists like me with an amazing avenue to not only showcase our work, but also learn from how others perceive and illustrate our nation’s heritage.”

Atazliana Atee said, “I am truly delighted to be an Usaha Tegas Heritage Art Competition winner. I hope that my win will motivate other aspiring artists particularly those from Sabah and Sarawak to take part in this competition next year.”

Muhammad Aqmar said, “My artwork 'Ikatan Kasih' is a special tribute to my mother. She has always been a pillar of support for me. She gave me the courage to take part in this competition and I am glad I did. I hope this competition continues to encourage new talent and help young artists achieve their dreams.”

The Watercolour category did not see a first prize winner, while Yew Zhi Jun of Alfa International College was awarded the second prize. Nicholas Ong Kar Wei of Equator College was the third prize recipient for the category.

The eminent panel of judges for the Competition comprised of respected names in the Malaysian art and heritage scene. The panel was headed by Ar. Parama Nathan who has been actively involved in the conservation of heritage buildings in Singapore and Penang for over 30 years. He was joined by Ar. Laurence Loh, a renowned conservation and heritage architect in Malaysia and the Asia-Pacific region whose sterling work has won a number of UNESCO Asia-Pacific Heritage awards.

Completing the panel was En. Juhari Said, an award-winning Malaysian printmaker with more than three decades of experience and Dr. Kim Phaik Lah, a published expert in art and heritage education who has been a judge in the Competition since 2001. Ms. Bibi Chew, renowned multi-disciplinary artist as well as recipient of the prestigious 2000 Bakat Muda Sezaman award by the National Art Gallery was the latest addition to the judging panel.