Taiwan, Thailand, and Japan are the top searched destinations for travel until the year-end according to search data revealed by Agoda.com. As the COVID-19 situation improves in many countries and social restrictions are being lifted, the travel itch that has been subdued for months now grows even stronger. Travelers are dreaming again of distance shores, as well as the option to explore their domestic travel scene. 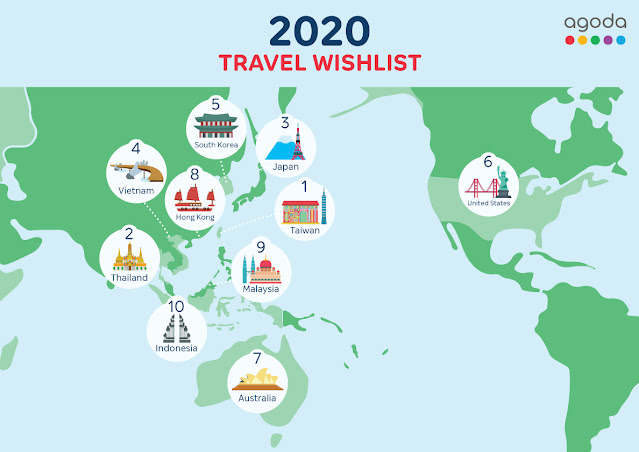 Taiwan tops the travel escape searches list among all different traveler groups from couples to solo travelers, family or groups, beating last year’s champs – Thailand, which is knocked into the second most popular searched destination ahead of Japan, Vietnam, South Korea in the top five.  The United States, Australia, Hong Kong, Malaysia, and Indonesia complete the top ten.

Agoda’s search data shows distinctions between destinations searched by type of travelers, with Japan and Thailand taking second and third spots of solo travelers, while more family travelers are searching for travel deals in Thailand, ahead of Vietnam.  For group travelers, Vietnam vies for the second spot ahead of Thailand and this traveler category also has a more diverse range of destinations searched including the Philippines and Israel, which don’t feature in the top ten for all travelers.

While in 2019, there was a clear mix of international search destinations across the Asia Pacific, now with fewer markets for international travelers open, Taiwan is receiving the bulk of searches – by Agoda domestic and international travelers. It is a key destination in the second half of 2020, dominating the list with seven of the most popular destinations in the top 10—Hualien (#1), Yilan (#2), Taipei (#3), Kenting (#4), Taitung (#6), Nantou (#8), and Taichung (#10). This marks a dramatic change from 2019, which featured a more diverse set of travel choices from across Asia.

Agoda dives into most searched cities

Hualien, Yilan, and Taipei are the most popular destinations searched for stays in the latter part of 2020, with Hualien and Yilan appearing as newcomers in this year’s top 10. Bangkok and Tokyo, the top two most searched destinations during 2019, fell to seventh and ninth spot respectively, while Taipei (#3) holds the same position as last year. 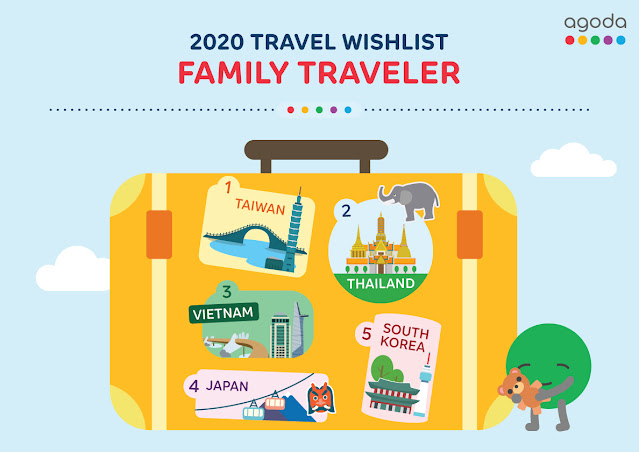 Hualian, with its port city and stretches of coastal beaches and walks, is the most popular destination for all categories of travelers, except for Solo travelers who opt for Tokyo. Yilan – known for its great natural landscape, Cold Spring, and local delicacies – holds the second-highest appeal to group and family travelers. Other cities with abundant nature that are being considered by family travelers are the coastal city of Taitung, and Nantou, where travelers can escape to the serenity of the Sun Moon lake. The couples are eyeing Taipei, while Solo travelers, who prefer big cities that offer plenty of cultures and a vibrant nightlife, are dreaming of Tokyo and Bangkok.

For couples, this year’s destination wishlist is lead by Hualian, Taipei, Bangkok, followed by Yilan, and Jeju Island, a shift in gears from last year’s couple searches which lead with Bangkok, Tokyo, Pattaya, Bali, Taipei. Families too are searching to alternative off the beaten path and less crowded destinations this year compared to 2019’s Tokyo, Bangkok, and Okinawa Island hot spots.  Instead, this year’s wishlists are led by Taiwanese destinations Hualien (#1), Taipei (#2), and Yilan (#4) in the top five, with Bangkok(3#) and Jeju Island (#5) also taking a spot.

Group travelers have shifted their searches to countryside destinations of Hualian, Yilan, Nantou, Taitung, and Kenting for travel in the remaining of 2020, a shift from beach destinations like Batangas (Philippines), Pattaya (Thailand), Okinawa Main Island (Japan), that featured as the top three searches in 2019.

Interestingly, for solo travelers, Tokyo, Bangkok, and Taipei firmly hold their spots and emerge as the top searched cities in both 2019 and 2020, with Hualian (#7), Jeju Island (#8), and Okinawa Main island (#9) making a debut this year. Singapore, Bali, and London which were Solo travelers’ most searched destinations in 2019 are missing from this year’s wishlists. 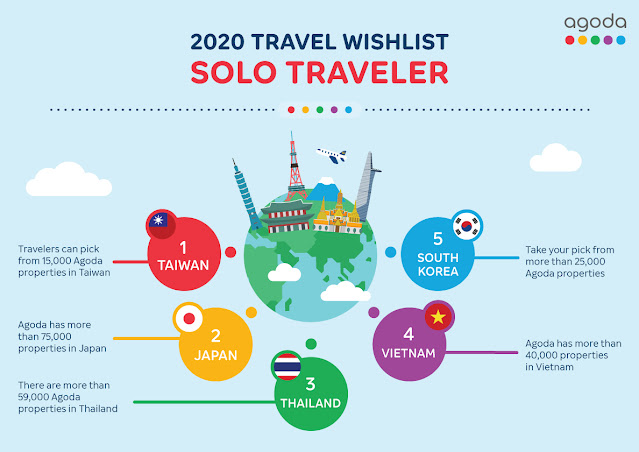 After spending some time with travel restrictions in place, travelers are shifting their travel searches away from well-known tourist destinations to lesser-known places and moving towards nature and beaches instead of city breaks.

“While Agoda’s search data has seen a shift toward domestic destinations as regulations are being eased for domestic travel, people are still dreaming about international travel adventures. What Agoda’s data is showing us is there is still a hunger to travel, people are enjoying exploring their own countries whether alone, with family, or with friends. But most importantly,  they still have hope that travel corridors will open later this year to some key markets where COVID has been more contained, and are looking out for great deals for when they do,” said. Tim Hughes, Vice President of Corporate Development, Agoda.

• According to Agoda’s search data, Malaysians favor domestic destinations this year, with the nation’s capital Kuala Lumper placed at a top spot across different traveler type lists, except Group, where Bentong is the most searched.

• While Kuala Lumpur and Penang are among the top three across all, couple, family, and solo traveler lists, they are not on the group traveler search lists.

• On international destinations, Tokyo and Seoul leap into the top ten this year, at ninth for all travelers and tenth for family travelers, respectively.

• Bangkok is still on Malaysian’s mind but slips from fourth to sixth spot this year.

• More solo travelers aim to travel to Bangkok (#2) this year, a jump from #4 last year.