on May 20, 2021
Sunway University’s School of Engineering and Technology (SET) Professors Dr Mohamed Kheireddine Aroua and Dr Saidur Rahman of the School were named Malaysia's Global Top 1% Researchers by Clarivate's Web of Science. 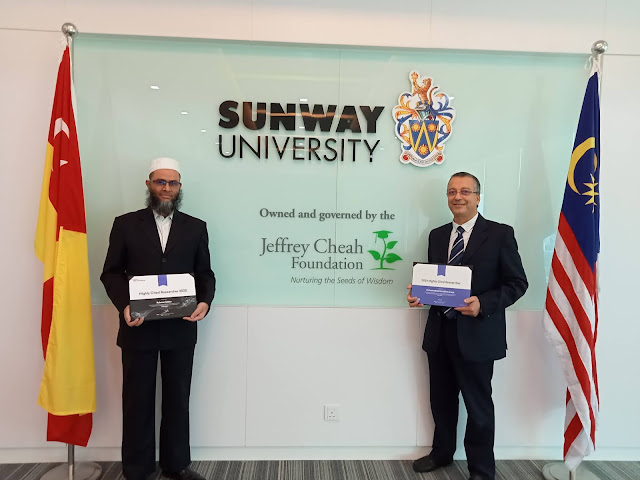 Both professors were also named among the top 2% of scientists in the world in the recently released list by Stanford University.
Clarivate annually identifies a list of ‘Highly Cited Researchers’ who have demonstrated significant influence in their research field through the publication of multiple highly-cited papers during the last decade. Their names are drawn from publications that rank in the top 1% by citations for field and year in the Web of Science citation index. Of the world’s population of scientists and social scientists, ‘Highly Cited Researchers’ are 1 in 1,000. In 2020, approximately 6,400 of the world's researchers were selected for this recognition in 21 research fields and across multiple fields.
Earning his third recognition in a row by Clarivate’s Web of Science, Professor Kheireddine is the Associate Dean (Research and Postgraduate Studies) and Head of the Research Centre for Carbon Dioxide Capture and Utilisation. His researches focus on three challenges mankind is facing, which are water security, energy security and environmental and climate change.
“This is a very inspiring international award. It is a great recognition to my research output and impact in the field of my expertise,” said Professor Kheireddine.
His ultimate goal is to translate his research findings to practical solutions which aims to mitigate the emissions of carbon dioxide, the major contributor to global warming.
“This issue cannot be addressed by a singular individual, team or institution. Collaboration and partnerships involving multiple research teams, universities and stakeholders is the key to successfully tackle this task,” expressed Professor Kheireddine in regards to the challenge of solving the carbon dioxide problem.
Professor Saidur is Distinguished Research Professor and Head of the Research Centre for Nano-Materials and Energy Technology, whose expertise is in nano-materials, energy storage, heat transfer, energy policy and renewable energy. This is his seventh recognition in a row by Clarivate’s Web of Science, implying his passion and dedication in his areas of research.
“It is an exciting moment and certainly drives me further towards high-quality and impactful research,” said Professor Saidur upon receiving the prestigious recognition.
Through his research, Professor Saidur intends to have an impact on academic, industrial, societal and environmental. Aside from producing high quality research publications in top ranking journals, Professor Saidur also educated several knowledgeable postgraduate students who advanced their career in top universities globally.
Professor Saidur’s consistent achievement in his field of research does not stray him away from advancing his research for a better future.
“Cost-effective, fast charging, longer duration, utility-scale energy storage would be my future research topic as these are grand challenges in my field,” he added.
Not only do Professor Kheireddine and Professor Saidur devote themselves to their field of research, they also wish to address the United Nations Sustainable Development Goals (UNSDGs) through their innovative ideas.
Sunway University is rapidly developing an ever increasing reputation for its research activities that contribute towards the economic and social development of the nation. These efforts are developing world-class researchers, supported by world-standard laboratories and international collaborations with some of the world’s leading international universities including joint research centres.
###
education