on June 13, 2015
The latest hit on toys in the Gudetama Egg (ぐでたま) which is simply cute. I spotted this little cute things when Little Grace told me about Egg Egg. Then I started GOOGLE and found more details of the lazy Egg.

Gudetama is a Sanrio character introduced in 2013 based on an egg lacking in "spunk". His name is a play on "gude gude"; used to describe someone with no energy or strength and possibly tama from tamago (egg). He is sometimes seen with a man in an orange/yellow costume that fully covers the body.


Gudetama came second in a Sanrio contest known as Food Character Election held from September 3rd 2013 until December 1st 2013. The winner was KIRIMI-chan and Kashiwankomochi came third.Gudetama is hard to motivate and has a negative, defeatist attitude. On his official Twitter account's profile comment, he says that he goes through trouble and murmur every day and that he only does it (tweets?) because "great people" told him to. He believes that some day he will be eaten (from Wiki) 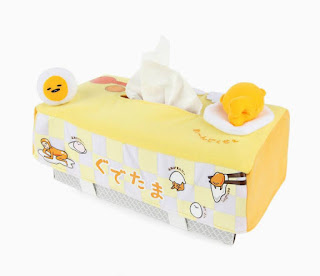 Now they have little merchandise too where you can buy from the Sanrio Shop (http://bit.ly/sanriostore)

And the squashie is simply adorable. Hope to have one here... but is selling freaking expensive here where in Japan is just 300 Yen