Posted by Pamela Yeoh on October 09, 2015
PUMA Women’s Creative Director and Brand Ambassador, Rihanna, and Global Sports Brand PUMA kick off their first venture with the release of the PUMA BY RIHANNA Collection under Rihanna’s FENTY label. Under her creative direction, the first collection introduces the PUMA Creeper, remixing the iconic PUMA Suede with a little bit punk and a little bit rebel. 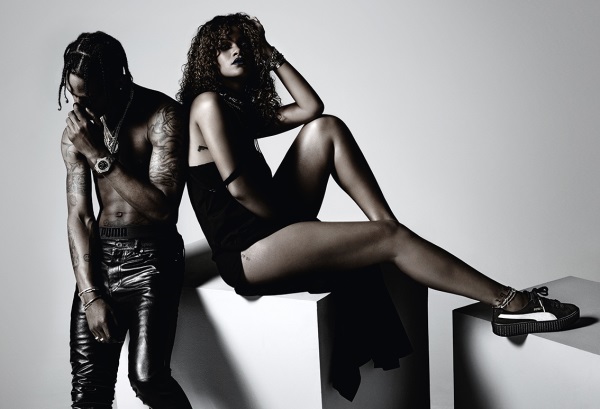 The PUMA Creeper harnesses the music and fashion feel of the revolutionary punk era with PUMA’s deep sporting heritage. Punk lit the streets bright on King’s Road in London and it soon caused a stir in the late 80’s in lower Manhattan’s underground club scene. The clubs have since closed but the culture never left, influencing the city’s fashion and music scene for years to come. That is the inspiration behind the PUMA Creeper.


To help launch the PUMA Creeper, Rihanna called on her friend, musician and record producer Travi$ Scott. Scott stars in the first-ever PUMA by Rihanna campaign alongside Rihanna, who also creative directed the shoot.

“I am so excited to finally introduce the PUMA Creeper to the world,” says Rihanna. “Partnering with PUMA has given me the opportunity to create pieces that are unique and unexpected. I really wanted to dig into their archive and give classic silhouettes my own spin. The PUMA Creeper is just that. And equally as cool, the fact that Travi$ Scott is joining me on my first launch is incredible.”

The PUMA Creeper transforms the classic PUMA Suede that was historically made popular by athletes in the 70’s and 80’s, beloved by punk bands, b-boys and skaters and today a style favorite of Rihanna. Upping the ante to the Suede is a platform or “creeper” sole married with a variety of fresh colorways and material combinations. Rihanna also took style advice from Los Angeles-based menswear designer Mr. Completely, to round out the PUMA Creeper design.

“Wouldn’t it be nice to see the faces of these children light up when they know that there is someone out there who cares about them? A Time to Give – G Hotel’s annual charity programme is giving everyone that chance to make a difference in the lives of the Salvation Army children. Starting from the 28th of November, G Hotel’s glorious tree will be filled with the hopes and wishes of each child. Let’s make this Christmas a memorable one for them by picking out a card from the tree, buying a simple gift which ranges from school supplies, to toys, clothes, shoes  and etc, and placing the gift together with the card under the tree at G Hotel Gurney’s lobby by 16 December 2019. The magic begins with a gift from you. Thank you for making a difference and putting a smile on the face of this child.”

The subsidy programme for infant carrier car seats at only RM100 is now available for online registration, limited to 150 units only. Kuala Lumpur, 2nd December 2019 – BMW Malaysia aims to accelerate the adoption of child car seats through a subsidy programme as part of the BMW Safety 360° initiative. In collaboration with Childline Foundation and Safe ‘n Sound, 150 units of infant carrier car seats will be made available at a subsidized price of RM100 each. This is in line with the Malaysian Transport Ministry’s move to enforce the usage of child car seats starting January 2020. To encourage the adoption of child car seat usage, drivers will not be penalised for the first six months of enforcement but will receive warnings to install the seats. Harald Hoelzl, Managing Director of BMW Group Malaysia said, “With only 30% of drivers using child car seats for their children, it became more imperative for us as automakers to press on for child safety, regardless of the challenges