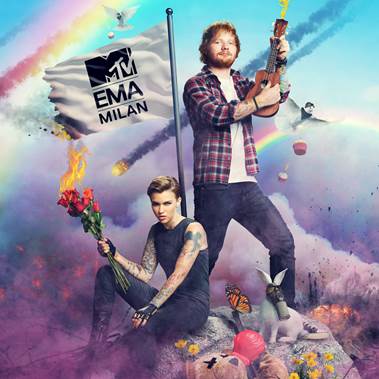 MTV today confirmed that global superstar Ed Sheeran will be hosting the 2015 MTV EMAs in Milan, Italy on Monday, 26 October at 3am (TH/WIB) and 4am (MY/PH/SG). Ed announced his hosting duties on his Twitter account last night, hinting that he would be joined by a partner in crime. Shortly after, Australian-born, LA-based actress Ruby Rose dropped news on her Instagram account that she’ll join Ed as co-host of one of the biggest global music events of the year.


Ed and Ruby will lead what is set to be an explosive edition of the MTV EMAs as it broadcasts live across the globe on Monday, 26 October at 3am (TH/WIB) and 4am (MY/PH/SG) from the Mediolanum Forum in Milan. A repeat telecast will air on the same day at 8pm (TH/WIB), 9pm (PH/SG), and 10pm (MY). Voting for all award categories is open on mtvema.com through 25 October at 6:59pm Singapore time.
Advertorial