on December 10, 2015
MTV, the world’s biggest youth entertainment brand took home the Best Entertainment (One-off/Annual) Award at the Asian Television Awards held last night at the Suntec Singapore Convention & Exhibition Centre for its music programme, MTV Music Evolution 2015. The show took place at the historic Quirino Grandstand, Rizal Park in Manila, the Philippines to a live audience of over 22,000 fans and was recorded live in May this year for global telecast under the MTV World Stage global series to an international audience of more than three-quarters of a billion households in over 160 countries. 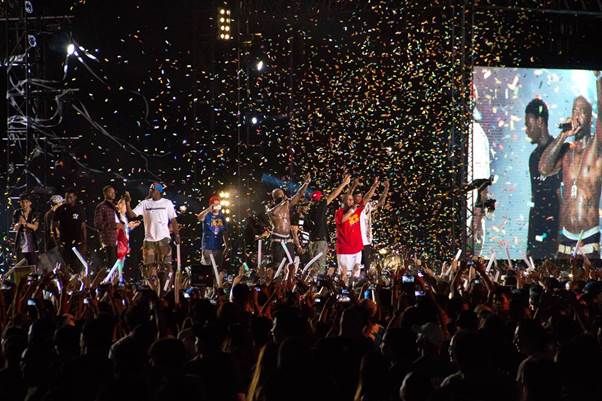 “What an incredible honour to receive this recognition from the industry! When we created MTV Music Evolution, we wanted to create a narrative about the evolution of a music genre. It was amazing to see how we helped create history by bringing together iconic and contemporary music acts – international and local – onto a single stage to do just that. We share this award specifically with the Tourism Promotions Board in the Philippines, who was with us right from the start of concept development. And we’ll aim to keep creating the most talked about live music events,” said Paras Sharma, Vice President of MTV & Digital Media, Viacom International Media Networks Asia.

MTV Music Evolution featured a stellar line-up of international and local acts who took to the stage in celebration of iconic and contemporary hip-hop music. Through explosive performances by Naughty by Nature, YG, Apl.de.ap, DJ Cash Money, and the Philippines’ own Gloc-9 and Abra, MTV Music Evolution 2015 showcased the way that hip hop has shaken up the music scene throughout the years – taking the music genre to whole new levels for a live audience.

MTV Music Evolution is a live music event that brings to life the evolution of a music genre and enables young people to experience and discover how music styles and sounds have evolved over the years. MTV Music Evolution marked its inauguration 2015 edition with a feature on hip hop, showcasing iconic and contemporary hip hop acts from both international and local music scenes on a single stage, while featuring the best of Philippine music and culture to international youth audiences. The concert was one of many exciting events under the Visit the Philippines Year (VPY) 2015 campaign by the Tourism Promotions Board of the Philippine Department of Tourism. Globally, MTV has a successful history of partnering with Tourism Boards to create compelling and engaging youth experiences. For more information, visit www.mtvmusicevo.com.
Advertorial