Posted by Pamela Yeoh on January 27, 2016
11street (www.11street.my), one of the largest online marketplaces in Malaysia, today announced that a total of 13,000 online sellers are now on board at its inaugural ‘Sellers Awards’ ceremony. 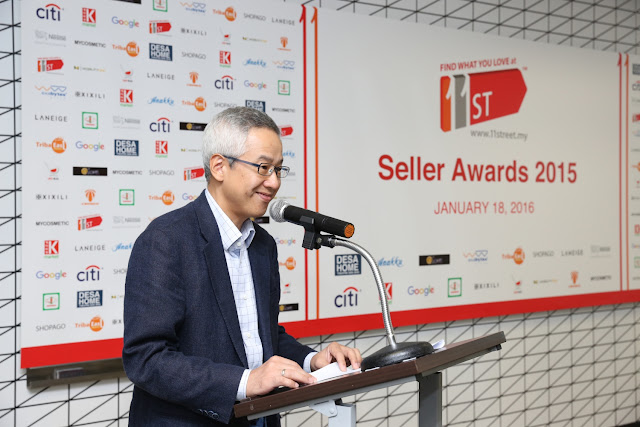 Fourteen (14) online sellers were awarded at the ‘Seller Awards’ with their outstanding sales performance and growth achievements, namely XIXILI womenswear, Afone mobile gadgets distributor, Triba-East Travel and more in recognition of the best efforts to grow their e-commerce businesses, with some of them achieving more than 100 percent in growth since their partnership with 11street.  (Refer to Appendix I for the full list of 11street Seller Awards’ Winners).

11street’s Chief Executive Officer, Hoseok Kim says that the ‘Sellers Awards’ represents the company’s appreciation towards its sellers that have played crucial roles in serving the local e-commerce market together with 11street. The selected sellers were evaluated based on a set of criteria that includes business performance, promotional efforts, as well as customer services and support.

He added, “Since it was launched last year, 11street has been receiving immense support from local shoppers, and have succeeded in achieving a spot among the top 30 websites in Malaysia . This made it possible for 11street to fulfil shoppers’ demands with a wide variety of more than five (5) million product listings, and to serve the ever-growing traffic to 11street. Additionally, we received strong support from the 13,000 sellers on-board, which is an additional 18% on top of the initial target of 11,000 that was set in early 2015 .”

In addition, the company has almost doubled its planned investment from RM35million (USD 10million) to RM 60.4million (USD 17million) last year to boost sellers’ developments and their business growths. This is in response to the need of business expansion because of the rapidly growing market demands for 11street.

Kim pointed out, “These include the building of the country’s first seller education centre and training facility – ‘Seller Zone’ , development programs that focused on imparting knowledge and experiences gained from 11street’s business in Korea, as well as marketing programmes and promotions to help sellers better reach out to local shoppers online. The extended investment for seller development was worth it as it further reinforced 11street’s commitment to equip, empower and nurture sellers to succeed in the e-commerce market.”

“As a result, we are proud to see that on average, 11street has helped 13,000 sellers to gain 30% more sales online over a period of the last 6 months, which have been vital to stimulate local SMB e-commerce businesses. In line with this, we also aim to encourage more traditional brick and mortar businesses to join the e-commerce bandwagon,” Kim shared.

In 2016, 11street plans to offer more advanced e-commerce training courses to equip existing online sellers. These courses will guide and enhance online businesses with experts from 11street through their experiences from grooming mature sellers in advance e-commerce markets such as Korea.

Kim further elaborates, “Moving forward, 11street is looking to place more importance in bringing existing local online sellers to the next level. While the number of sellers continues to grow, it is more crucial that we further educate and support our current sellers to sustain their businesses online. 11street also plans to increase the investments significantly for sellers training and developmental programmes in the next few years.”

11street will also extend its efforts by rolling out a comprehensive remote seller’s community programme this year, starting with sellers based in Penang, Johor, and Ipoh. 11street will further build on its promise with the outreach to sellers outside Klang Valley, by providing them with the benefits of being a part of the e-commerce community.

“Our commitment to seller development will bring direct positive impact to the growth of e-commerce in the country. At 11street, we also aim to continue our strategic initiatives with key industry experts such as Multimedia Development Corporation Sdn Bhd (MDeC) and Google Malaysia to nurture local sellers,” Kim ends.