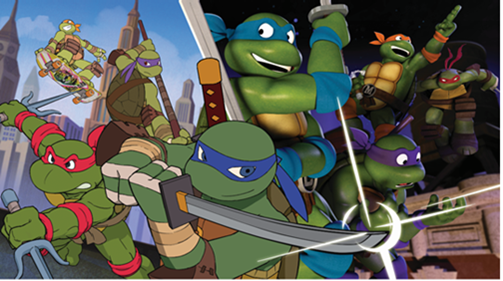 If you’re a Teenage Mutant Ninja Turtles fan, you will want to hear this…Worlds collide as the voice cast of the 1980s Turtles, Cam Clarke, Rob Paulsen, Barry Gordon and Townsend Coleman joins forces as Leonardo, Raphael, Donatello, and Michelangelo, respectively, in “Trans-Dimensional Turtles,” a new episode of Nickelodeon’s Teenage Mutant Ninja Turtles debuting in Asia on Friday, 29 April at 5pm (WIB), 5.30pm (TH), 6pm (MY/PH) and 6.30pm (HK/SG). In this new half-hour episode, the Turtles are transported to another dimension where they meet their ‘80s alternate-reality counterparts. Actor Pat Fraley also reunites with the ‘80s cast for the first time since the original series premiered to reprise his role as Krang.

In “Trans-Dimensional Turtles,” all eight Turtles must battle to eliminate both the ‘80s Krang and Kraang Sub-Prime. After meeting their ‘80s counterparts in a 2D-animation world, the entire clan moves back into a CG-animation dimension, giving their new retro friends a taste of their realm. Additionally, in another dimensional twist, the episode will offer a glimpse of the Turtles in a comic book world resembling Kevin Eastman’s Mirage Studios comic book series.


Season four of Teenage Mutant Ninja Turtles follows the Turtles as they embark on their most epic adventure yet – outer space! Allied with a cyborg known as the Fugitoid (voiced by David Tennant), the Turtles hurdle through space, meet strange and bizarre alien creatures, and combat galactic monsters all in a race against time to save planet Earth.

In the lead up to the premiere of “Trans-Dimensional Turtles,” viewers can re-watch earlier episodes and catch a new episode “The Cosmic Ocean” from season four starting Monday, 25 April at 5pm (WIB), 5.30pm (TH), 6pm (MY/PH), and 6.30pm (HK/SG).

For more Turtles action, viewers can log on to Nick-Asia.com for digital exclusives, games, quizzes and more. Beginning 29 April, fans can play the brand-new game set in the ‘80s Turtles environment, “Teenage Mutant Ninja Turtles: Kickin’ it Old School,” where players will travel through the city streets and rooftops charging through Foot Ninjas to diffuse all the dimensionizers planted by Krang to save the city.

The Paramount Pictures feature film premiered 7 August 2014 and has grossed $477MM worldwide to date. A sequel, Teenage Mutant Ninja Turtles: Out of the Shadows, is set to be released on 2 June 2016.

Additionally, kids and families are invited to catch a "Nick in the Box” special at the following timings and keep their eyes peeled for something big and unexpected. The network is also launching brand new episodes from live action titles Henry Danger, The Haunted Hathaways, Nicky, Ricky, Dicky & Dawn and animated series Sanjay and Craig and Breadwinners.