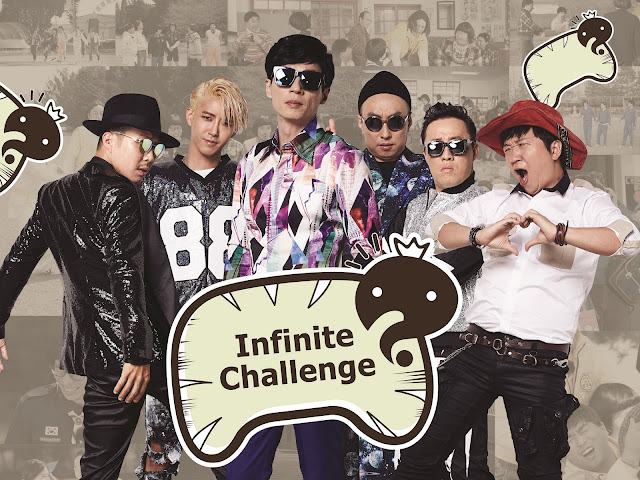 To celebrate, we have pulled together 10 of our favourite episodes that aired on Oh!K (Astrol Channel 394) last year:

1.     Jack Black Special: Variety School of Fun (Ep 465)
Who doesn’t like an East meets West theme, especially when it stars Hollywood funny man, Jack Black! We loved that he took on the challenges with a smile on his face, participating in a mashup of pillow fights, balancing contests, and even a very special surprise challenge based on his iconic role in School of Rock! Our favorite part was when Black showed off his impressive dancing skills with a performance of “Gangnam Style”!


2.     Ugly Friends Festival (Ep 466-468)
No one likes to be known as the ugly duckling, especially when among colleagues and friends! We especially loved this episode which starred famous personalities Jo Se Ho, Defconn, Ji Suk Jin, Bobby (IKON) and more! Perhaps hitting them where it hurts most, this episode featured an epic competition between friends as they fought against each other to not be crowned the shows ‘ugliest’ participant!

3.     Infinite Challenge Dream (Ep 455 – 457)
Bringing the competitive spirit outside of the game show, this episode saw our favourite hosts being put up for auction, all in the name of charity! To make the situation more awkward, the bidders were the producers from various MBC entertainment shows! No one likes to get bought, especially if it’s by your boss! This hilarious episode starred Jeon In Hwa, Son Chang Min, Baek Jin Hee (My Daughter Geum Sawol), Chen Bolin and more.

4.     The Letters of Fortune (Ep 464)
This was one of our favorite episodes! Hitting close to home, the hosts were tasked with crafting letter to one another outlining how they envisioned each other's lives would be a year later. To their dismay, the recipients were then told they had to complete the items listed in the letter before 2017! As if it wasn’t hard enough to keep to basic New Year resolutions!

5.     2015 Infinite Challenge Music Festival (Ep 435 – 440 & 442)
As huge K-pop fans, this episode definitely had to make it on the list. Starring BIGBANG’s G-Dragon and Taeyeng, IU, JYP, Zion.T, Hyukoh and Yoon Sang, this musical dream team had to help the Infinite Challenge hosts get ready for their bi-annual music festival. Performing alongside other K-pop stars, the cast put on a magnificent show!

6.     Sixth Man (Ep 419 – 424)
This was definitely a show to remember. In a game changing decision, the hosts started the search for the sixth member of Infinite Challenge. Inviting several popular stars including Defconn, Joo Sang Wook, Henry Lau (Super Junior), Choi Siwon (Super Junior) and a bunch of other talented K-stars to audition for the role, the competition was fierce! Contestants got down and dirty!

7.     Kwang Hee’s Welcome Ceremony (Ep 427 – 429)
After a grueling competition, Kwang Hee emerged as the winner! His idea of turning “fashion terrorists” into fashionistas, received three out of five votes from the famous five, and he was eventually named the sixth cast member! While the “Welcome Ceremony” was loosely veiled as a good will gesture, Kwang Hee was forced into a crash course, having to participate in the worst challenges that all of the hosts had to endure in the past!

8.     Extreme Part Time Jobs (Ep 430 & 431)
It’s always fun when game shows go out of the studio and into the real world! This episode took it one step further, sending each host to different corners of the world! Haha and Jung Hyung Don travelled to China to build roads at a cliff, while Park Myung Soo and Jung Jun Ha flew to Kenya to babysit five baby elephants! And who could forget, Yoo Jae Suk and Kwang Hee, who found themselves in Dhobi Ghat, working at the world’s biggest laundromat in Mumbai!

9.     10th Anniversary Celebration: Deserted Island Special (Ep 425 & 426)
The 11th anniversary was only made possible by the 10th anniversary! Always a favorite, this episode saw the hosts dress up in suits and head out to a deserted island. Thinking that they were going out for a glorious celebration, they were quickly shocked to find that it was more of an outdoor experience that would put their survival skills to the test.

10.  90s Special: Saturday Saturday, I Am A Singer (Ep 411)
In this throwback episode, the hosts brought together the best singer from the 90’s for a concert that transported viewers back in time to the Renaissance of K-Pop! This highly rated episode scored impressive viewership rating, and starred Turbo (Kim Jong Kook & Kim Jung Nam), S.E.S (Bada & Shoo), SNSD’s Seo Hyun, Jinusean as well as other notable singers who reigned the 90s with their memorable performances.

Make sure to celebrate Infinite Challenge’s 11th Anniversary on Oh!k (Astro Ch. 394) with a brand new episode airing same week as the Korea, every Saturday at 8.00pm. This Saturday (23rd April), also catch a special replay of two of our favorite episodes, The Letters of Fortune and Jack Black Special: Variety School of Fun at 9.30pm.