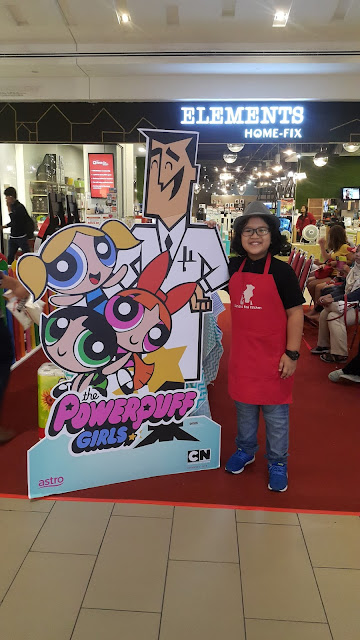 When Professor Utonium accidentally added Chemical X to his recipe of sugar, spice, and everything nice, The Powerpuff Girls were born. Now Cartoon Network is asking viewers in Malaysia to identify their very own POWFACTOR!

POWFACTOR is a global initiative that helps kids discover the “special ingredient” within them that drives them to change the world. In particular, it recognises kids who have found a way to empower themselves and give back to their communities.


In Malaysia, Cartoon Network (Astro Channel 616) has teamed up with self-taught kid chef Danish Harraz Abd Hafiz (fondly known as Abang Danish). At just 10, Danish runs his own baking and cooking business online, catering to the demands of tens of thousands of followers on social media. In hopes of inspiring them, he provides recipes and shares cooking videos. Aside from this, Danish also gives back to society by channeling 10% of his revenue to the Need to Feed the Need (NFN), a community-run soup kitchen.

Fans of The Powerpuff Girls in Malaysia are encouraged to join in the fun and submit their own POWFACTOR trait via the Astro Circle website. The 10 best entries will win a selection of Powerpuff Girl toy-sets including action figures and plushies.

Elsewhere in Asia, kids who have demonstrated their POWFACTOR include 14-year-old Kyra Poh from Singapore who was recently crowned as the "World's Fastest Flyer”, and Isabel Sieh, Hamzah Marbella, Louise Mabulo from the Philippines, who are making their mark in the art, culinary and digital spaces.
Cartoon Network will air some seriously awesome POWFACTOR programming on three Fridays - April 14, 21 and 28 from 4pm which is themed after Blossom, Bubbles and Buttercup’s own POWFACTOR strength – leadership, kindness and strength. During this programming block, Danish, Kyra, Isabel, Hamzah and Louise will also share more about their passions.

For more fun POWFACTOR related activities visit www.PowerpuffYourself.com and take a POWFACTOR personality quiz and create a personalised avatar. The website is available in English, Bahasa Malaysia and Chinese.

“Wouldn’t it be nice to see the faces of these children light up when they know that there is someone out there who cares about them?

A Time to Give – G Hotel’s annual charity programme is giving everyone that chance to make a difference in the lives of the Salvation Army children.

Starting from the 28th of November, G Hotel’s glorious tree will be filled with the hopes and wishes of each child. Let’s make this Christmas a memorable one for them by picking out a card from the tree, buying a simple gift which ranges from school supplies, to toys, clothes, shoes  and etc, and placing the gift together with the card under the tree at G Hotel Gurney’s lobby by 16 December 2019.

The magic begins with a gift from you.

Thank you for making a difference and putting a smile on the face of this child.”

The subsidy programme for infant carrier car seats at only RM100 is now available for online registration, limited to 150 units only.

Kuala Lumpur, 2nd December 2019 – BMW Malaysia aims to accelerate the adoption of child car seats through a subsidy programme as part of the BMW Safety 360° initiative. In collaboration with Childline Foundation and Safe ‘n Sound, 150 units of infant carrier car seats will be made available at a subsidized price of RM100 each.

This is in line with the Malaysian Transport Ministry’s move to enforce the usage of child car seats starting January 2020. To encourage the adoption of child car seat usage, drivers will not be penalised for the first six months of enforcement but will receive warnings to install the seats.

Harald Hoelzl, Managing Director of BMW Group Malaysia said, “With only 30% of drivers using child car seats for their children, it became more imperative for us as automakers to press on for child safety, regardless of the challenges we enco…