on June 06, 2017
Malaysian consumers are choosing bigger screen size smartphones, with over two-fifth (45%) of the 8.5 million units of mobile handset purchased in the last 12 months measuring over 5 inches. 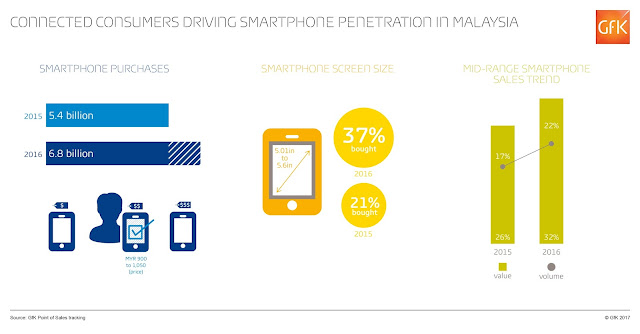 According to GfK Point of Sales tracking, 37 percent of smartphones sold in the country during this period had screen sizes ranging from 5.01 to 5.6 inches; as compared to only 21 percent a year before, making it the fastest growing screen size segment in the past 12 months.
Across all of Malaysia’s technical consumer goods sectors tracked by GfK which include Consumer Electronics, Major and Small Domestic Appliances, Photography and Information Technology, consumer spend is highest in Telecommunications.

GfK findings reported that consumers bought around MYR 6.8 billion worth of smartphones, a significant increase from MYR 5.4 billion in 2015, with the biggest spike in sales contributed by mid-range models costing between MYR 900 to 1,050.
Chinese smartphone brands were the key drivers to the spike in demand for mobile devices last year, which registered the highest number of new smartphone brands entering the marketplace.
“With the recent nationwide expansion in mobile connectivity, consumers in the country are increasingly using their smartphones for activities such as mobile shopping, social media and general surfing of the internet,” observed Stanley Kee, Managing Director for Southeast Asia, GfK. “Shopping apps, especially, are also gaining popularity, paving the path for mobile payments. More consumers today are contributing to the growth of mobile commerce (m-commerce) in Malaysia, making payments through their mobile devices for retail items, airline tickets, and services such as Grab and Uber.”
In the 2016 GfK Shopper Monitor Electro consumer survey conducted across APAC, majority of Malaysian respondents indicated price and brand image as key deciding factors in purchasing smartphones.
“Since Malaysian consumers are largely motivated by price, we believe the mid-range category of smartphones will continue to dominate the market this year,” said Kee. “The marketplace will remain competitive, as we anticipate further sales surge for this popular device with the country’s recovering economy being a key contributing factor.”
A separate GfK study based on Point of Sales (POS) Tracking also revealed that the product life cycles of smartphones have significantly reduced as newer models are being introduced at a faster pace. This implies brands now have a shorter time window to effectively market their smartphones. It becomes imperative for them to constantly understand and obtain insights on how their marketing mix efforts and investments impact sales of their products so as to optimise strategies swiftly to achieve maximum returns on their portfolio.