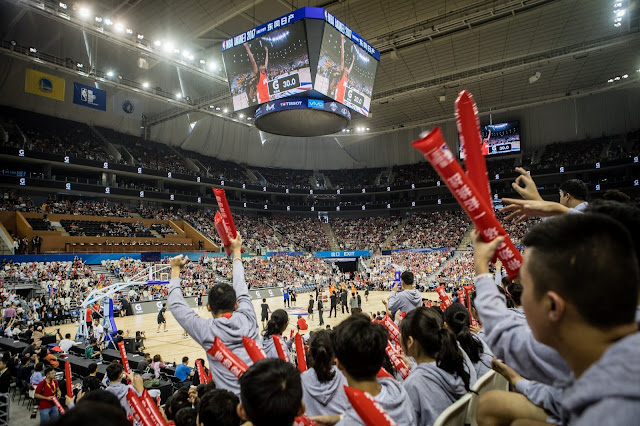 Jr. NBA Malaysia 2017 presented by Dutch Lady programme culminated with a once in a lifetime NBA experience trip for 16 lucky Malaysian Jr. NBA All-Stars as they headed to Shanghai, China to watch a live NBA Game.

The programme saw 95 Jr. NBA All-Stars from Southeast Asia – Malaysia, Vietnam, Singapore, Indonesia, Philippines and Thailand – aged 10-14 years attending the NBA Global Games China 2017 presented by Master Kong in Shanghai on October 8, between Golden State Warriors and Minnesota Timberwolves. The crowd went berserk as the Golden State Warriors went full throttle and ended the game with a score of 142 to 110.

The boys and girls had the exciting opportunity to meet NBA legend Jerome Williams, who played with the New York Knicks. As part of their visit, they also received additional basketball training and toured the city.

This year, the Jr. NBA Malaysia program presented by Dutch Lady and conducted in partnership with the Ministry of Education attracted a total of 1,500 young basketball enthusiasts from all over the country in efforts to promote a healthy lifestyle and emphasise the importance of regular physical activity through basketball.

The participants are also trained in the fundamentals of the game and instilled with the Jr. NBA’s S.T.A.R. values - sportsmanship, teamwork, a positive attitude and respect. Throughout the duration of the program they were also taught the importance of proper nutrition and lifestyle, such as the consumption of two glasses of milk per day for sufficient calcium and protein.

“Our Jr. NBA All-Stars once again experienced an unforgettable journey in a foreign country where they not only witnessed a LIVE game but also had the chance to take part in advanced basketball training together with their fellow All-Stars from other countries. Such experiences are priceless, not only for advancing their skills in the game but also to learn lifelong lessons and create lifelong friendships. I’m sure this will be a trip they remember for a long, long time to come,” said Jim Wong, Associate Vice President of Global Marketing Partnerships at NBA Asia.
To date, the Jr. NBA program has reached more than 1.5 million children, parents and coaches across Southeast Asia through camps, clinics and the NBA Cares community outreach activities.