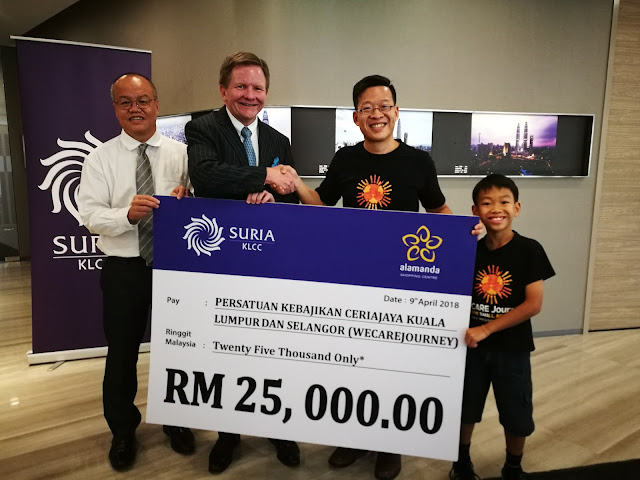 Suria KLCC Sdn Bhd today announced that it has successfully
raised RM25,000 through “Share The Care” initiative to help patient who suffers from Spinal
Muscular Atrophy (SMA). The project was a collaboration with WeCareJourney, a non-profit
organisation founded by parents of SMA’s patient during Christmas last year and this year’s
Chinese New Year. 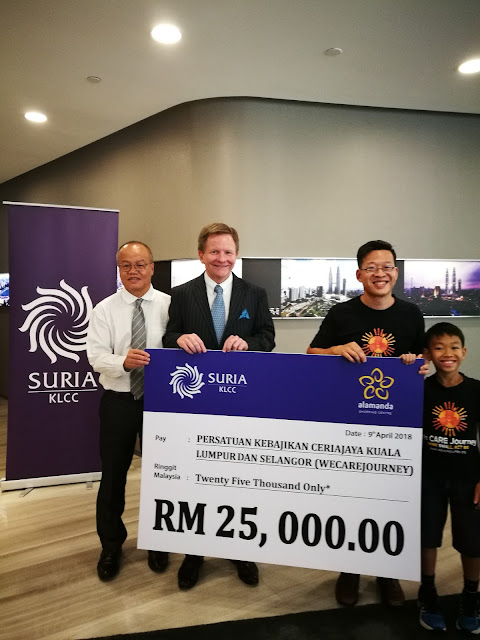 “WeCareJourney was founded by two dedicated and passionate parents, Edmund Lim and Yap
Sook Yee, after the birth of their son, Branden who was diagnosed with Spinal Muscular Atrophy
(SMA). They started the organisation in an effort to increase awareness about SMA, as well as
providing support and guidance to other parents who are in a similar situation,” says Andrew
Brien, Executive Director/ Chief Executive Officer of Suria KLCC Sdn Bhd.
The organisation relies completely on individuals and corporate donations for administrative
and operational costs. In addition, the founders devote their time and effort to manage the
organisation and create awareness about SMA while raising their two young sons. Adds Andrew,
“It’s these very reasons why Suria KLCC selected WeCareJourney as the beneficiary of our
fundraising initiatives.”
Committed to making a difference, Suria KLCC saw an opportunity to work with the very
children receiving support from the organisation by tapping into their talent and creativity in
designing special Christmas greeting cards. The fundraising initiative ran from November 28 to
December 28, 2017. The greeting cards designed by special children; 7-year-old Branden and
10-year-old Jayden were sold at Suria KLCC and Alamanda Shopping Centre for a minimum
donation of RM10.
Suria KLCC continued to raise awareness about SMA during Chinese New Year where shoppers
and visitors who donated RM10 for the cause received a red ribbon as an appreciation of their
support from January 25 to February 28, 2018.
With the funds raised, WeCareJourney will be able to purchase two electric chairs and
equipments to help with digestion, circulation, and breathing known as standers. It provides
therapeutic and physiological benefits for children with SMA.
Spinal Muscular Atrophy (SMA) is a genetic disorder that causes progressive muscle weakening
by affecting the motor nerve cells and motor nerve cells in the spinal cord, taking away the
ability to walk, eat and breathe. It is the number one genetic cause of death for infants and
can affect any race or gender. In America, 1 in 10,000 is affected while in Malaysia about 1 in
every 50 Malaysians is a genetic carrier.
To know more about SMA and WeCareJourney, visit www.wecarejourney.org.
Events