A LEONARD THENG & THE CERITA PRODUCTION PRESENTS “STORIES FROM A MIXTAPE” 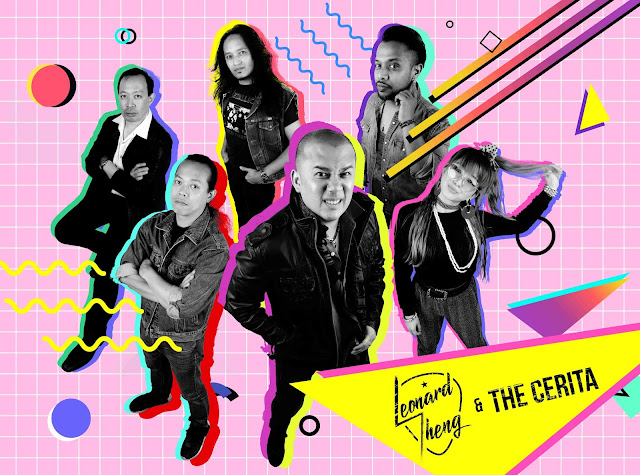 Drawing from their own experiences of falling in love and its labyrinth of emotions, local band sensation, Leonard Theng & The Cerita are all set to woo the audience, with their musical prelude, “Stories From A Mixtape” which will see them pay homage to 80’s music and lyrics, navigating the highs and lows of one’s first encounter with the four letter word, LOVE! 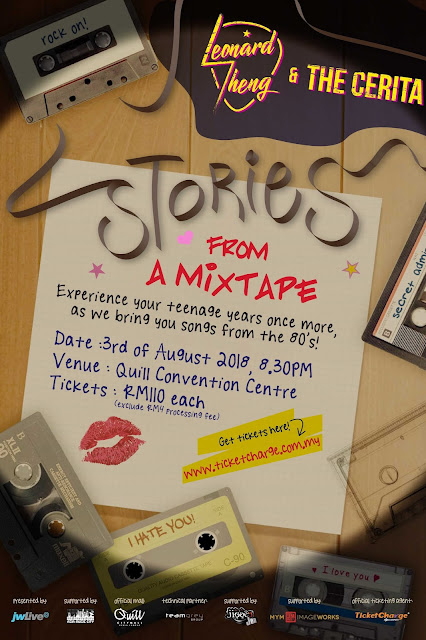 Under the direction of Leonard Theng, this musical offers KLites a journey encompassing adolescence, with notable highlights focusing on the laughter and tears of the 80’s teenage love stories, which many today can make references too. Promising to keep the audience entertained, Leonard Theng & The Cerita, will be creating a myriad of roller-coaster emotions and a night of reminiscence, capturing the essence of teenage love in various scenes. “We hope to make this musical into a household repertoire, bringing in together thousands of Malaysians to celebrate the power of music that brings people together, regardless of stature or religion, whilst focusing on this “New hopeful Malaysia” rather than the differences that has set us apart for many years, quipped Mr. Leonard Theng.

Broken down into four parts and featuring hit songs from the 1980’s, the musical scores will be performed by Leonard Theng & The Cerita, whilst the storyline will be narrated and acted by Jiggee Jon.

Audience will be glued to their seats from

Scene 1 - CAN’T FIGHT THIS FEELING, where almost if not at least 85% have experienced that first crush, that one person whom we were secretly “in love” with, that girl or guy you were infatuated with, how your world just lit up with just by a glimpse of her / his smile.

SCENE 2 - THE POWER OF LOVE. Reminiscing the moment when you first held hands? That gentle embrace as you look deep into each other’s eyes? How time stood still during your first kiss? What a feeling! Everything was perfect in that moment! You found your soul mate!

The subsequent scene deals with the reality of love.

Scene 3 - SHATTERED DREAMS, explores the emptiness inside your heart as you watch her / him disappear into crowd at the airport as she/ he goes away to further her/ his studies. The countless letters written with no response! The moment when you realize that you are no longer the centre of her / his world. It’s really over and it hurts like nothing you’ve experienced before! Your first break up!

SCENE 4 - NOTHINGS GONNA STOP US NOW, basically acts as reminder of how you wake up one morning and realize that your tears are in vain. You move on and get over that person. You hang out with your friends and party! You meet new people, make new friends, travel. You want to live life to the fullest!
There are 4 Acts in each scene in Stories from A Mixtape that highlights the various parts of the first love experience with acting and music. This musical reflects the scale and passion of this band consisting of Leonard Theng & The Cerita.

The band came together about two years ago sharing a common goal in the Malaysian music industry. That goal was to create shows with a specific storyline and emotional link that will have the audience wanting more. Each band members have backed up Local & International recording artist such as Atilia Haron, Ning Baizura, Kris Dayanti, Alleycats, and Ella, they have also been involved with a few successful musicals in Kuala Lumpur such as Ola Bola, Fame & Charlie Brown.

From performing in Rock Festivals, Jazz festivals and also notably a tribute to the late Sudirman by TAS Seni Teater Rakyat, ONE THOUSAND MILLION SMILES, Leonard Theng & The Cerita have the experience, credentials and passion to make this goal of theirs a reality via this musical act.

The first musical event will be held at Quill Convention Centre@ Quill City Mall, on 3rd August 2018, with tickets being sold at RM110 per ticket. The second showcase will be held on 13th October, 2018 at Drum Asia Life, Kota Kinabalu and potential third showcase to be held in November in Johor Bahru.

Audience can expect laughter; smiles, tears and hugs as Leonard Theng & The Cerita take you on a musical gamut like never before! You can be assured that tissues will be on sale that day.

Tickets to catch Stories from A Mixtape for their 1st performances on 3rd August 2018 can be purchased online at www.ticketcharge.com.my. For more information on tickets and group sales, please log on to www.leonardtheng.com