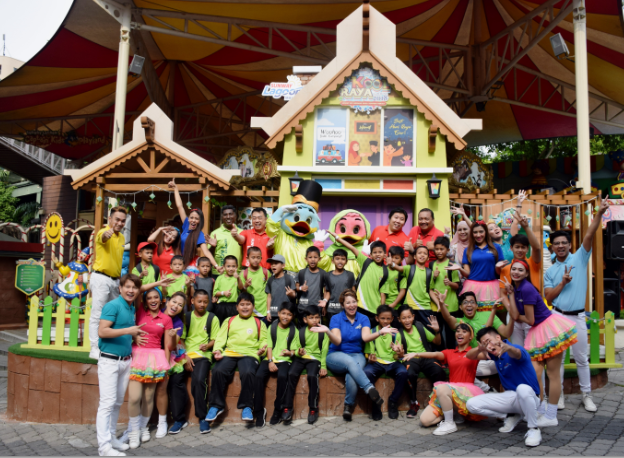 In the spirit of Raya, Sunway Lagoon played host to the children from Rumah Anak-Anak Yatim Damai, Kuang to a fun-filled day out at the theme park.
The event kicked off with the Sunway Lagoon’s welcome dance and special appearance by the park’s very own celebrity couple – Captain Quack and Lady Quack, who were dressed in traditional costumes.

Following the warm greetings, the children were then brought on a wildlife educational tour at the Wildlife Park where they were given an up-close tour at the Sunway Lagoon’s Wildlife Park, which houses more than 150 species of animals from around the world, such as the white tigers, panthers, white gibbons, and the black-eared marmoset. The children were also entertained by the Wildlife Multi-Animal Show at the Wildlife Theater where they met more of the many species of animals found at the park.
“Sunway Lagoon is all about bringing people together and creating wonderful memories. We are touched to see the excitement among the children from Rumah Anak-Anak Yatim Damai and the smiles on their faces. The festive season is all about spreading the love. It is even more meaningful for us to be able to bring smiles, joy, fun and a memorable experience for them, especially during the Raya season.” said Sean Choo, General Manager of Sunway Lagoon.
The fun continued with a meet-&-greet session with SpongeBob SquarePants and Patrick Star at Nickelodeon Lost Lagoon, Asia’s first Nickelodeon themed land. To further add to the merriment, Sunway Lagoon had a surprise birthday celebration for 8 of the July babies among the young visitors. This was truly a memorable, one of a kind experience for them, as the party was held in a fun place like Sunway Lagoon. The children were treated to a lunch feast at the Surf Deck followed by some fun Kool games specially planned out by the Sunway Lagoon team.
They were then presented Kool Raya gift bags by Sean Choo, consisting of various educational material and stationery items. The children then spent the rest of the day exploring the rest of the attractions at the theme park.
For more information, please call Sunway Lagoon at +603-5639 0000, visit www.sunwaylagoon.com or connect to www.facebook.com/SunwayLagoonMalaysia.