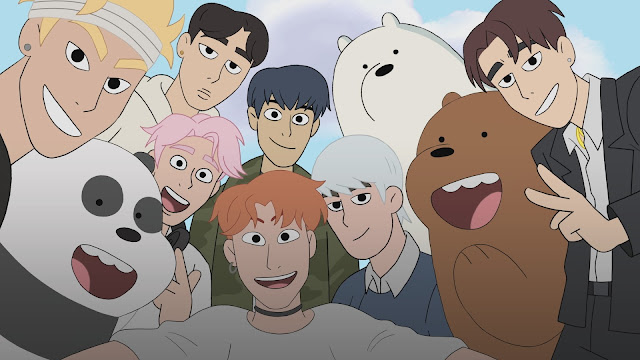 MONSTA X, one of the world’s most popular K-pop groups, is getting animated in an all-new episode of Cartoon Network’s Emmy-nominated We Bare Bears premiering in the United States in May. Panda (voiced by Bobby Moynihan) is a huge MONSTA X fan and he is in for the surprise of a lifetime thanks to his thoughtful Bear Bros. In “Panda’s Birthday,” Grizz (voiced by Eric Edelstein) and Ice Bear (voiced by Demetri Martin) mastermind a creative scheme to help Panda meet his favorite K-pop band on his birthday.

MONSTA X and Ice Bear eventually meet for the first time; Ice Bear (who is surprisingly fluent in Korean) successfully places himself via travel luggage in the group’s hotel room.

Regarding this special collaboration, MONSTA X member I.M tells Billboard, “We are absolutely thrilled and honored to be in an episode of We Bare Bears. It’s one of the most beloved animated series in the world! We put in a lot of effort into this collaboration and hope our fans, as well as We Bare Bears fans, can truly enjoy it.”

Following the breakout success of their first album Take.1 Are You There?, MONSTA X is currently on a worldwide tour to promote their sophomore album Take.2 We Are Here.

In Asia, the special episode will air simultaneously on Cartoon Network (Astro CH 616) and Oh!K (Astro CH 394) on 9 August at 9am, and will be available for viewing on the Cartoon Network Watch & Play app as well.