on October 23, 2019
In conjunction with its 50th anniversary this year, the National Kidney Foundation of Malaysia (NKF) today paid homage to patients who were aided by the organisation, together with nurses and staff who have served at NKF’s dialysis centres located throughout the country. 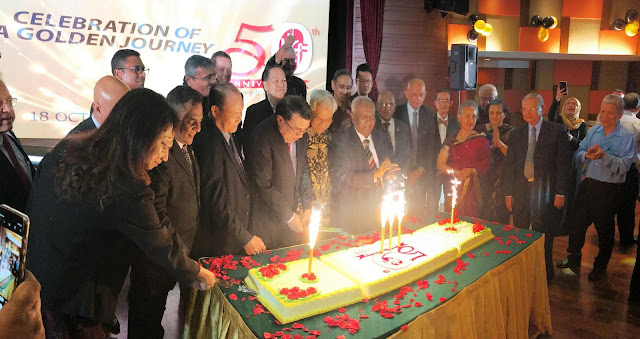 In a simple yet meaningful celebration at the Royal Lake Club, Kuala Lumpur, NKF, Malaysia’s leading non-profit dialysis treatment provider, honoured its pioneers and long-serving staff.
Aptly themed “A Golden Journey”, the anniversary celebration was attended by Y. Bhg. Tan Sri Dato’ Dr. Abu Bakar Suleiman, President of the National Kidney Foundation of Malaysia; Y. Bhg Dato’ Dr. Zaki Morad Mohd Zaher, Chairman of the National Kidney Foundation of Malaysia, Members of the Board of Governors and Board of Directors, former and existing NKF staff, patients as well as donors.

“Since our inception in 1969, NKF has grown tremendously and reached such a great number of patients, thanks to the unwavering support of various government bodies and agencies, countless other organisations and individuals. This has enabled us to expand our role from being just a dialysis treatment provider, to becoming a one-stop national resource centre for all kidney-related matters. Our tireless efforts to fight kidney-related disease has also been recognised through the Code of Good Governance which was recently awarded to NKF by the Registry of Societies Malaysia,” said Dato’ Dr Zaki Morad, Chairman of NKF Board of Directors.

“Now that we have achieved the endorsement by the Ministry of Health for all our centres, the MQA Accreditation of our Training Centre, and MSQH for several dialysis centres, our patients can be assured of consistent high quality service,” said Dato’ Dr Zaki.

Annually, NKF needs RM24.9 million to subsidise the dialysis treatments costs for its 1,700 patients who seek treatment at its 28 dialysis centres nationwide.

“It is no easy feat to raise such a huge sum but through the generosity and overwhelming backing from various organisations, as well as donations from members of the public, grants and various forms of financial support we have received, NKF is able to subsidise the treatment cost for the patients on dialysis,” he said.

The organisation is on the forefront of promoting public awareness of kidney disease and its treatment, while striving to raise the standards of care it provides to patients with kidney failure and those who are suffering from various kidney-related illnesses.

Currently, regular health talks, public forums, health screening and counselling sessions are conducted in various cities and towns across Malaysia to educate the community on early detection and prevention of kidney failure. In recent times, these included NKF’s #SihatBersama and #GreenWednesday social media campaign, which were launched in support of the Ministry of Health’s efforts to promote healthy living amongst Malaysians as well as educating the public on organ donation and organ transplantation.

To date, NKF has screened about 600,000 Malaysians for early signs of kidney disease, including the Orang Asli community. Over the next few years, NKF will be channelling more resources – including using social media platforms – to promote kidney health and prevention of kidney failure.

One of the NKF pioneers honoured at the event was Shirley Koh, its former Fundraising Head.  Recalling her journey, she said: “Now, with NKF’s good work known to many more people, I hope the organisation will continue to receive strong financial support and hopefully, in due time, NKF will be able to provide free dialysis treatment to all needy dialysis patients.”

Another pioneer in the NKF family is its Jalan Hang Lekiu Centre Manager, Jayarani D/O Savarimuthu. She said: “Seeing NKF centres across the country brings a deep sense of appreciation of the efforts of every single person that made NKF what it is today”. Dialysis patient at NKF-Calvary Cheras Centre, Chin Yoke Kian, who suffers from kidney failure as a result of Systemic lupus erythematosus (SLE) said: “Thank God for NKF, as I am unemployed. The fees are affordable.”

Meanwhile, Josbir Singh S/O Keher Singh who undergoes dialysis at NKF – Apex Centre in Klang said: “I am proud to be with NKF. December 2018, marked my 22 years of dialysis. Whenever the doctor comes, he will advise on how to take of my health as a dialysis patient.”
Similarly, another NKF patient, Hafsah Hajar who regularly receives dialysis treatment at Charis Centre in Cheras cited a short period when she was required to go through dialysis in the Kepong centre. “Although I was not their (Kepong) patient, the nurses treated me well and equally as other patients.”

According to Dato’ Dr Zaki, as NKF continues to serve kidney patients in need across the nation, the organisation remains in need of long-term financial support for its efforts, given that the country has 40,000 individuals on dialysis with more than 7,000 new patients every year.
For further information National Kidney Foundation Malaysia please call 03 – 7954 9048 or visit http://www.nkf.org.my/.