Superfans, gather for the greatest Warner TV challenge yet 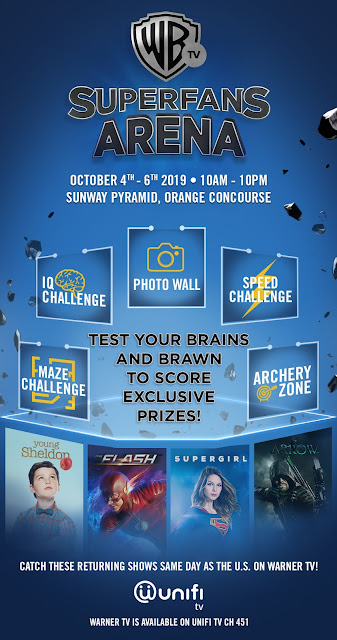 Warner TV is challenging Malaysians to channel their inner superheroes and put their skills to the test at the upcoming Superfans Arena! Superfans Arena (previously known as Heroes Arena) is an annual event held in collaboration with Unifi TV, and it’s in its third year running.

Set to take place from 4 to 6 October, 10am to 10pm at Sunway Pyramid’s Orange Concourse, the event promises a fun-filled weekend for event-goers!

Superfans Arena will feature exciting show-themed games and challenges inspired by the channel’s shows, including fan favourites like Young Sheldon, Supergirl, The Flash and Arrow. Admission to the event is free for all!

Here is a quick snippet of the show-themed challenges:

Young Sheldon Pipeline Challenge
Sure, you’re smart, but are you smarter than the 11-year old boy genius, Sheldon Cooper? Put your intelligence to the test – connect the pipes and get the ball rolling before the time runs out!

The Flash Speed Battle
You’ve heard of speed runs, but can you beat The Flash in his own game? Find out by having a go at this classic game of the Batak Challenge!

Supergirl Kryptonite Crisis
You’ll need more than super-strength to work this maze challenge. Channel your inner Supergirl and shut down the kryptonite as quickly as you can!

Batman and Friends Photo Opportunities
In celebration of Batman’s 80th Anniversary and Friends’ 25th Anniversary, strike your best Superfan pose and snap some Insta-worthy pictures with the Bat and the iconic orange couch respectively. Get to bring home complimentary photo printouts too!

What is a series of challenges without a reward for the victors? Superfans who complete all five activities at the event will stand to bring home exclusive Warner TV merchandise!

Don’t forget to catch the highly anticipated returning series – Young Sheldon, The Flash, Supergirl and Arrow – on Warner TV (Unifi TV Ch 451), which will air on the same day as the U.S.