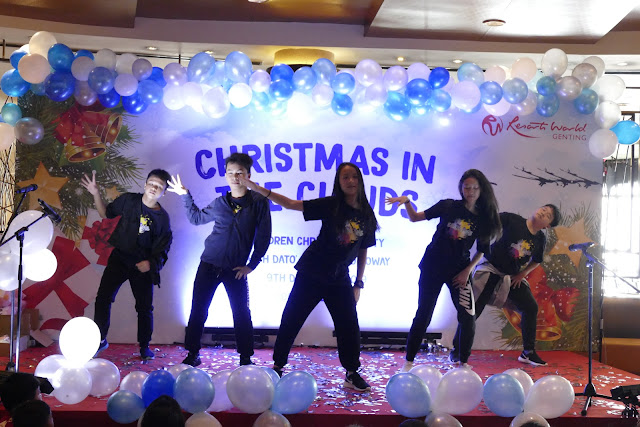 Christmas is more than just the season of joy and merriment; it is also the season of giving. In keeping with the spirit of sharing and caring, it was a day of magical charm 6,000 feet above sea level as Resorts World Genting hosted 300 underprivileged children from ten homes on 9th December 2019 to a beautiful Christmas party full of splendour and wonder. 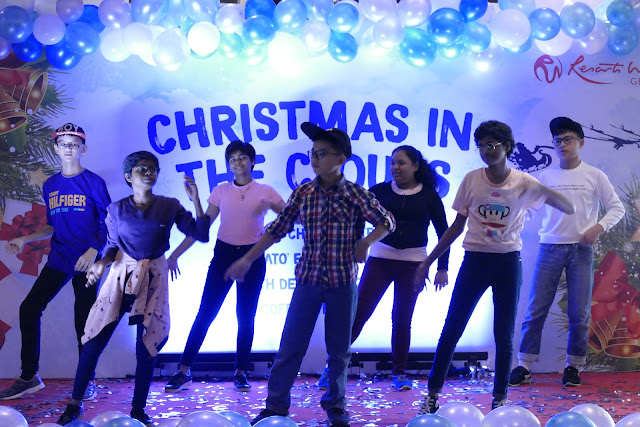 After an exciting journey up the mountain, the children were welcomed to the Coffee Terrace at Genting Grand Hotel. The restaurant was transformed into wonderland in the sky just for the children. Fluffy white clouds of all sizes and shapes floated around the space, with silver, white and blue balloons enhancing the fairytale-like atmosphere. In this paradise, the children got to mingle with Santa who was the magician and balloonist of the event. Ms Katherine Chew, Vice President of Resort Communications and Public Relations of Resorts World Genting hosted the event with her team and volunteers.

A blast of silver confetti then marked the start of the party, allowing the children to tuck into a traditional Christmas lunch with all the trimmings. Hailing from ten homes – Persatuan Insan Istimewa Cheras, Persatuan Kebajikan Kanak-Kanak Istimewa Insan, Good Samaritan Home, Sai Pandian Orphanage Children Home, Pusat Jahaan Bribuan Kasih, Lighthouse Children Welfare Home Association Kuala Lumpur & Selangor, Rainbow Home Cheras, Yayasan Sunbeams Home and Lotus Charity Care Centre – the halls were filled with the sound of children’s laughter and chatter over lunch. Serenading the group as they feasted was the organizing team from Resorts World Genting. They got everyone into the Christmas mood
with classic songs such as We Wish You A Merry Christmas, Jingle Bells, Feliz Navidad and Jingle Bell Rocks.

Katherine Chew, Vice President of Resort Communication & Public Relations of Resorts World Genting said, “Its Genting Winter Wonderland here at the resort! There are so many things to see and do this Christmas at the resort and we wanted to share this magical experience with every child who are here today.  It’s a small gesture from us but we hope we have brought cheer, pleasant memories and a big amount of joy to these children.”

Having had a hearty meal – which included fluffy meringues, sweet cotton candy and snow-dusted doughnuts in keeping with the cloud theme – the children were then treated to a fun-filled magic and balloon show. After that thrilling performance, the children were encouraged to come on stage to perform their favourite number for the Christmas season, the cloud wonderland instantly turned into a disco destination. And, of course, Christmas is never complete without presents.  Chew was invited on stage to  distribute the gift to each child who personally chose their own gifts from a wishlist provided by employees of Resorts World Genting. Ranging from remote controlled cars, building blocks and make-up sets to sports shoes, scooters and bicycles, each present brought the biggest smile of to each child.

After a group photography session, it was then time for the children to wander and witness the amazing Christmas entertainment available at Resorts World Genting - they head down to SkyAtrium to witness the beautiful Nutcracker wonderland; walked over to SkySymphony stage and stood under the lights in amazement as the colourful Snowball Express performance started. It played out dazzlingly across three-story high screens.

Indoor treats are fun, but there’s more to be seen outside. The group then headed outdoors into the cool mountain air to see the bright lights and beautiful sounds of the Genting Winter Wonderland at Metro Park. The children got to experience an authentic European Christmas market and see the towering crystalline Christmas tree. The group trooped around as they get in line to move to their next destination.

At Snow World, the children donned jackets and gloves to frolic in the snow. Making snow balls, sliding down with tubes and hiding in the igloos. The children covered the entire place and explored the 3D art installation and posed for pictures. It was an experience that they will never forget and treasure as they bade goodbye to their Resorts World Genting hosts with a final round of smiles, cheers and hugs.