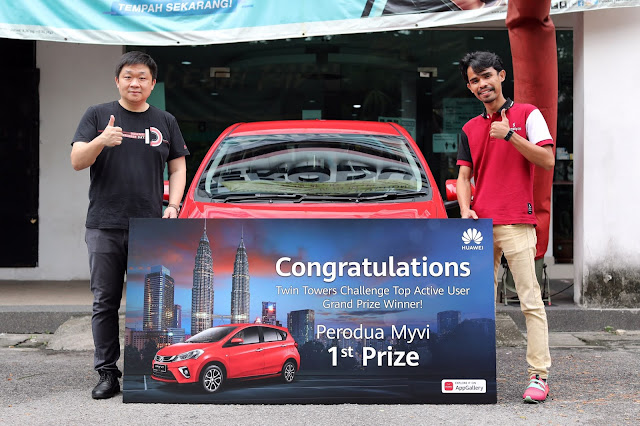 Huawei Malaysia has held two (2) prize giving ceremony for the top 10 lucky contest winners of The Twin Tower Challenge on Friday, 24th July 2020. The campaign concluded with a high note of over RM200,000 worth of prizes given away during the month-long campaign from 1st to 30th June 2020
These prizes include the ultimate grand prize of a brand new Perodua Myvi, other range of HUAWEI Smartlife ecosystem products and valuable HUAWEI redemption points which users can use to redeem awesome deals on HUAWEI AppGallery. The campaign was organised by Huawei Mobile Services (HMS) and sponsored by Huawei Services HK to encourage more users to explore the many benefits of using HUAWEI AppGallery.

One lucky winner of the campaign was Mr Mohammad Zamri John as he was the top active user in HUAWEI AppGallery of June 2020 during the campaign period. He received his brand-new Perodua Myvi at Roda Kayangan Sales Sdn Bhd much to his excitement.
“I have two HUAWEI Mate 30 Pro smartphones, which I use for daily life and mobile gaming, so I’m very active on HUAWEI AppGallery and it hasn’t given me any problems. In June, I wanted to join the Twin Towers Challenge and at the same time, I upgraded my home internet to 500mbps, so it was a great time to test my download speed. I also think it’s great that AppGallery supports multiple app downloads at one time!” said Mr. Mohammad Zamri John on his winning.

The campaign aims to highlight the various apps that are available on HUAWEI AppGallery ecosystem in which Huawei is constantly ramping up developer support and attempting to attract bigger developers in growing the number of useful apps especially Malaysians’ most used local apps.
One of the largest banks in Malaysia's app, Maybank2U and UOB Mighty is now available on the Huawei AppGallery which adds more convenience for users. Majority of the daily apps that most Malaysians use such as Touch N' Go eWallet, Astro Go, Shopee, Lazada, HERE WeGo, MySejahtera and many more are also in the AppGallery.
More than just an AppGallery, it also allows users to discover their next favorite apps, games and enjoy exclusive rewards. Starting from now to 31st December 2020, HMS is offering 1-month free trial of HUAWEI Cloud Storage up to 2TB for redemption exclusively for HUAWEI users and also RM5 cash rebate for Penang Smart Parking app up for grab when users download the parking app from the HUAWEI AppGallery. Discover and explore more rewards only on Huawei AppGallery.