The LEGO Group calls on all masters of Spinjitzu to celebrate a decade of LEGO® NINJAGO® with the launch of new LEGO NINJAGO sets and a new season of television content. 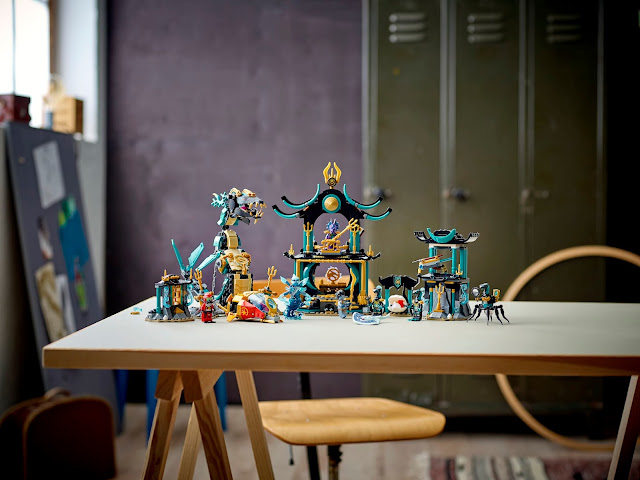 Many kids have grown up with LEGO NINJAGO and the LEGO NINJAGO® Masters of Spinjitzu television series, where Master Wu and the ninja Kai, Cole, Zane, Jay, Lloyd and Nya have taught them valuable lessons about life, while using their courageous ninja skills to fight the forces of evil.

In a world where many children and young adults feel insecure and an intense pressure to live up to expectations, NINJAGO has taught fans how to master ninja skills or “Be Ninja” in real life, teaching them values of inclusivity, friendship, confidence, and staying true to oneself. Through its stories and morals, as well as its building and play experiences, NINJAGO has positively influenced fans and helped them navigate the path into young adulthood and its many challenges.

“There comes a time when we all must grow up. When that time comes, it's important not to forget the lessons of our childhood. Because our childhood is the greatest training ground one will ever have.” – Master Wu.

LEGO NINJAGO toys offer an escape to a fun-filled world of fantasy action where imaginative kids can join forces with their ninja heroes in the never-ending battle to defend NINJAGO City. Ninja fans and their friends can choose to play with a vast collection of building toys including powerful mechs, detailed ships and superfast jets.

Highlights from 1 June 2021 include the underwater sets. For the younger ones who are four and above, they can grow their love of building with 71749 LEGO NINJAGO Final Flight of Destiny’s Bounty, a fun-filled ship playset, featuring jet ski and dragon toys, an island with a prison, as well as four minifigures. They can set sail with Kai, Zane and Jay on their ninja ship for an epic battle on the seas against Ghost Ninja Karenn. They can either go on the attack by jumping on a superfast jet ski or sitting on the back of a dragon swooping down from the sky to capture the villain and dock at the small island to throw him in pris

For the older children who are eight and above, they can enjoy the 71754 LEGO NINJAGO Water Dragon playset to join Zane, Nya and an attack-ready dragon for underwater combat against the evil Maaray Guards and win the wave amulet to protect the future of NINJAGO City. The impressive dragon toy has a posable head, jaw, legs, neck, wings and a moving tail that can be used as a weapon to help fuel hours of enriching play for youngsters. They can also choose to dive deep underwater for thrilling battles with the 71755 LEGO NINJAGO Temple of the Endless Sea to join Kai and Nya to take on Prince Kalmaar and his dangerous Guards at their secret lair, while trying their best to not wake the powerful sea serpent Wojira. Otherwise, there is also the 71756 LEGO NINJAGO Hydro Bounty where kids can go deep beneath the sea as they take on Prince Kalmaar and his Guards using cool features such as firing the spring-loaded shooters or release a mech and two mini submarines into their battle – all to fuel the imaginations of young ninja fans.

2021 will also welcome Season 3 of the LEGO Ninjago TV series. Titled The Abyss and the Flood, the first part of the season which comprises four episodes, will see the ninja embark on a rescue mission to an uncharted island to save Lloyd’s mother and Master Wu. With the help from the only known survivor, the ninja will travel to a mysterious island, inhabited by a tribe that possesses an Amulet which can awaken the mythical doomsday serpent, Wojira. Interested viewers can watch the episodes on Cartoon Network on 12 June 2021 at 12pm and 6pm, or catch them on LEGO YouTube page from 18 June 2021.

Season 3, part 2 of LEGO NINJAGO TV series, comprising 16 episodes, will then premiere on Netflix on 1 July 2021. Titled The Island, each 11-minute episode will bring viewers into the adventure of Nya, who undertakes a search for answers when the ninja’s powers are disrupted by a mysterious recurring energy signal. It was then that they discover Nya’s powers are linked to Wojira, which can be awoken by anyone who has their hands on the two magical amulets. Watch how Nya courageously defeats Wojira as the new episodes continue from the ninja’s earlier rescue mission to save Lloyd’s mother and Master Wu.

Those interested to watch the full TV series can also watch past seasons on Netflix.

‘’It has been an amazing journey to see a product range turn into something that kids have enjoyed for 10 years,” says Michael Svane Knap, Design Manager at the LEGO Group, who has been working on the LEGO NINJAGO product line since 2013. “Some have grown up with LEGO NINJAGO and are now expressing their gratitude and telling us how they have learned lifelong skills. In my opinion, that is the best thing about LEGO NINJAGO. Kids learn about friendship, confidence and much more... And of course, that ninjas are cool!’’ he adds.

A special website (Ninjago.com) will also be launched on 1 June 2021 to invite children and fans of NINJAGO to experience the journey of mastery through a series of missions and content.